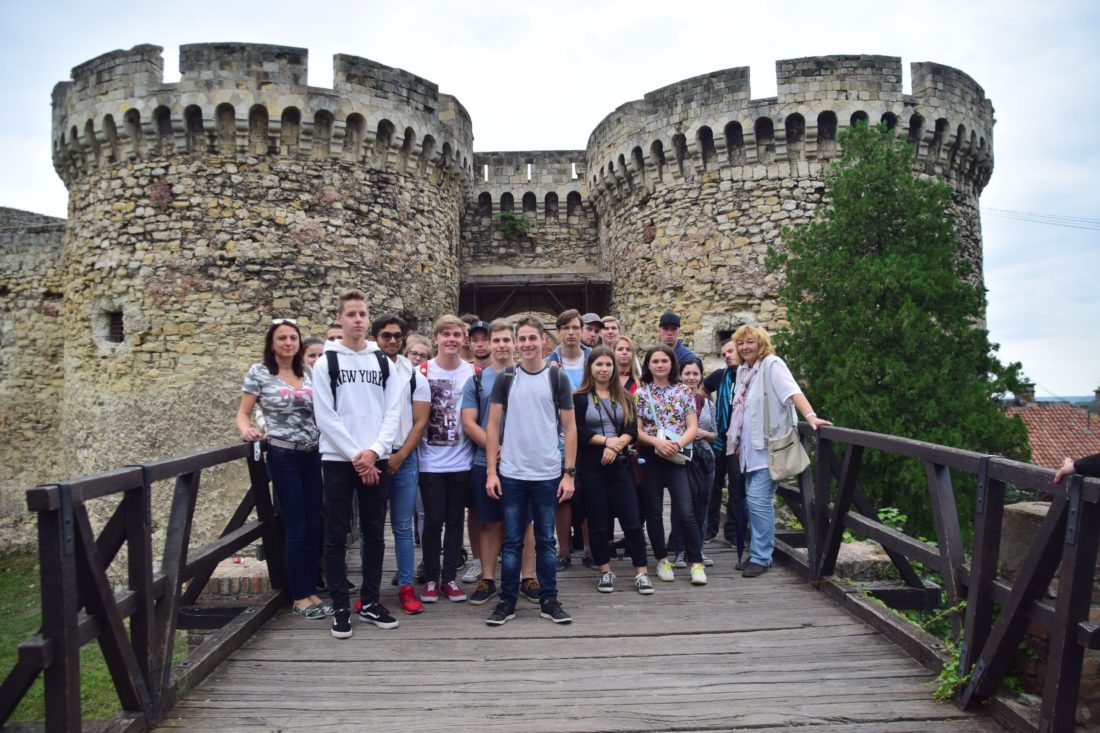 The two groups of Szeged left from the Community House of Szeged on 17th 07 2018. to the local history camp in Délvidék. Our first day was a bit long; our first trip led to the Kopácsi-rét National Park, where the wonderful flora and fauna of the blew our minds. During the one-hour-long voyage on the lake in the National Park we saw many of the local bird species, cormorants, black-crowned night herons, grey herons, and tringas of which the photographers could even take some photos. The guide gave a brief presentation concerning the history and the main characteristics of the area.At the end of the day we traveled to Vukovar where following the diner we visited the war memorials in the city, and were given a short presentation about the history of the city, and stiry of the war.

Serbian camp, day 2. On this day we left the dalmate themed hostel, and after a well-saturating breakfast, we started heading towards Serbia. We arrived to our destination after a 3 hour long journey. We went on a sightseeing walk in Novi Sad, in which we saw the most famous churches, squares and statues. Then we crossed the Danube to see Europe’s 2nd largest fort. After the walk we tried some traditional Serbian food, the so called pljeskavica. After lunch we visited a wineyard in Karlóca, where we tasted the best honey and wine of the whole area. We were astonished by how much difference it had from the ones we were used to. After Karlóca we went to Belgrade where we had a delicious dinner and then we took our rooms there after the long day.

Local history camp in Délvidék On the 3rd day of the local history camp in Délvidék, having left Belgrade, we visited Szendrő to see its castle. After that we returned into the capital to learn more about its history. Nándorfehérvár – as it was called in the medivial times – is a culturally colorful city in terms of both ethnics and religions. Now we learned some new interesting facts about it, and we could even visit the Orthodox temple which is still being built for more than 80 years now.

Our group traveled from the Serbian town of Zimony on Friday, from which an adventurous road led to Orsova, Romania. We boarded and watched the Iron Gate Bridge on the Danube, which has become navigable by Count István Széchenyi thanks to the Széchenyi Monument, which was inaugurated for 1.5 months, and is one of Europe’s largest hydroelectric power stations. It used to be the bridge of Trajan, where the Roman legions captured Dacia in the first years of the 2nd century AD. This is remembered by Traian’s table. After the voyage we went to Herculesbath, where we had a delicious dinner and a warm welcome. All in all we could say that we had a day full of new experiences.

We started our fifth day of the local history camp is Délvidék in Herkülesfürdő, Romania. The city is known for its bath – hence the name – as it was one of the biggest and most reputable baths in Austria-Hungary. In those times many people came here to fresh up a bit and to maintain their health, as we did it today. After that we had a short rest and lunch in Temesvár, following which we returned to Serbia. Getting closer to the end of the camp we revised all the programs we had had so far; we got richer with many experiences and memories and we hope it will continue. As we reached the city of Nagykikinda, we cooled ourselves down with icecream, and then continued our trip to Aba where the hotel we stayed at was. In the evening we arrived at the hotel where a wedding was taking place at that time.

Today after we woke up and had a breakfast at Hotelpark we soon went to Szabakda. We arrived in Szabadka which is famous for its huge market that is cheap at the same time. The group was given a two-hour-long free time to walk through the place and buy something. Then we went on to the last stop of our journey, Róka Farm and after we had lunch there, we visited a city nearby, Palics and the lake there. We saw the park and other sights built next to the lake, had an icecream and then returned to the Farm we stayed at. There we had good time around the campfire and could spend our time with other outdoor activities as well such as table tennis, football or swimming. After yesterday’s long and tiring programs we hardly could begin the new day. However, following the breakfast and packing out of the Farm we had a short sightseeing tour in Szabadka during which the tourist guide told us a few interesting facts about the history of the city focusing on the Art Nouveau architecture that is unique to the 20th century’s European architecture style. After the one-hour-long tour in the city we left the country and took the road to the Community House of Szeged.