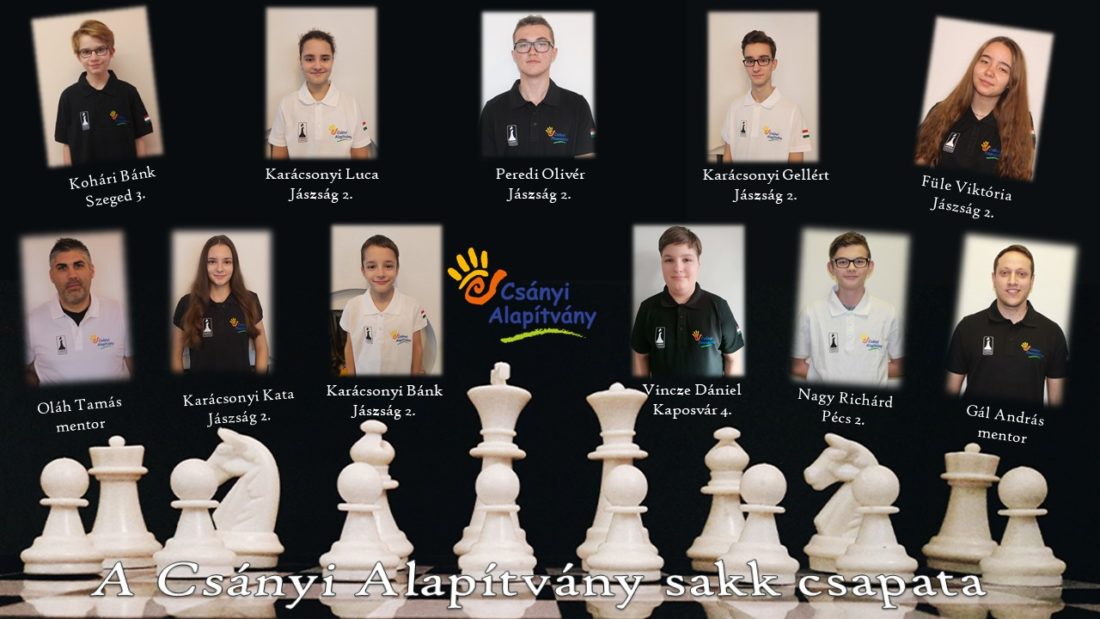 “This year the chess team of the Csányi Foundation took on the invitation of the Polgár Judit Chess Foundation’s online chess competition for students. Our team finished as group winners after 7 rounds of various matches during the qualifier rounds and qualified for the semi-final, where group matches will take place again from March. The great results are due to the excellent group work and persistent labour. We wish good luck to our team!”Oláh Tamás, Gál András mentors

Members of our team:

“This competition is a very special experience for me because I stopped playing chess many-many years ago, and I didn’t think I would have the chance to ever use this knowledge again. I feel like I have developed tremendously since the beginning and the end is still far away. It’s very interesting to compete online, from many aspects it’s a lot better than if we would have to travel a lot but I hope I can meet my team soon.” Füle Viktória, Jászság Group 2

“It was my first time competing in a professional chess competition with the team of the Csányi Foundation. Despite being an amateur player, I won 2 out of 3 matches. I’m excited about the next round!” Nagy Richárd, Pécs Group 2

“I really enjoyed the qualifier matches in total. The goal was to qualify for the semi-final which meant that we had to be in the first 3 groups but we managed to win the group round. The competition was close the whole time and we managed to win the next to last turn round – even though it happened with a little bit of luck – earning us the qualifier’s virtual cup. My individual performance was 7/5,5 points, which is not bad but I hope that I can manage to keep up the good work! I hope that the team can also stay successful in the next parts of the competition!” Karácsonyi Gellért, Jászság Group 2

“I really enjoyed all 7 rounds of the online competition; I didn’t think that even the qualifiers would have such difficult matches. I was afraid of playing badly and causing our team not to qualify because of me. In the end, I played quite well and I rooted for my siblings and teammates. I’m excited about the next rounds!” Karácsonyi Bánk, Jászság Group 2

“We had an exciting and interesting competition; it was great to play as a team and root for each other. There were times when I was not happy about the outcomes but in the end, we did well. My most memorable match was the next to last one where I had a pawn advantage but I sadly ended with a tie in the end. I was under pressure during that match because the outcome of the group depended on it.” Karácsonyi Luca, Jászság Group 2

“It was a great experience for me because I could play against people from different countries. I hope we can win the competition! I owe a big thank you to Csányi Foundation and to the Polgár Judit Chess Foundation for inviting us to the competition and letting us take part in it. It caused me great happiness.” Vincze Dániel, Kaposvár Group 4

“I was really happy to be a part of the first round as the 2. player of a fantastic and coherent group. There were some stressful and sad moments but in total, I can only think about the past rounds with great happiness. The collective online meetings, the practice rounds, the matches, the encouragement and the chance to get to know each other better – these all added to the success of the Csányi Chess Team :)” Karácsonyi Kata, Jászság Group 2

“I was happy that I could compensate for the competitions I missed because of the virus. I was forgetting about chess nowadays so the competition was even greater for me now. I hope we can be just as successful in the next rounds as we were now.” Kohári Bánk György, Szeged Group 3

“I had a really great time during these rounds of the competition. There were many times where I felt my heart beating in my throat because of the excitement and I was eager and wanted to win all the time. I succeeded in every match except one and I’m very grateful to the Foundation for letting me take part in this competition and letting me show the world what I can do.” Peredi Olivér, Jászság Group 2