One month, one book! 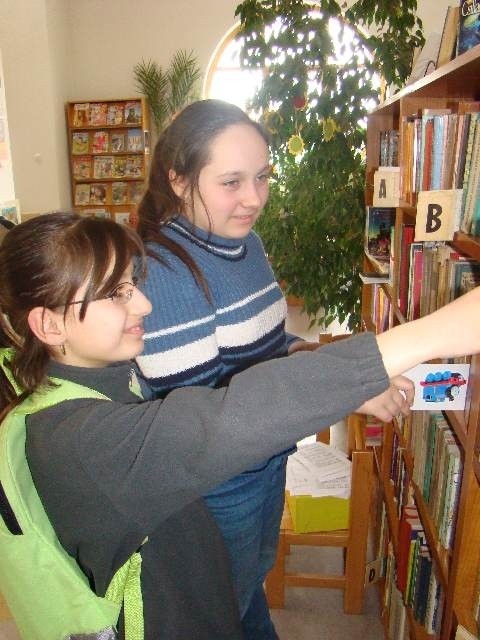 One month, one book!

Group 3 of Jászság enrolled in the Town Library’s Children’s Department in Jászberény in February. They got to know the services, the departments, the method of enrolment and loan and they also adapted the techniques of research.

Unfortunately, not a lot of children can read well, because they need more practise. Today, besides TV, interactive games and Internet, not a lot of children read or even are interested in reading and books. Our goal is to make children like reading, and not only their reading skills would improve but also their fantasy, creativity and thinking.

We introduced a game with Mariann Tóth, the leader of analysis of reading comprehension. In each month, students should read one book they choose, than they have to present it like a recommendation at the next occassion.

Marking each other, they can get to know which book was the most interesting to them. Than they can choose each other’s books for the next occassion. The first month’s winning book recommender: Attila Chmelik

Since I was a kid, I am reading and watching Harry Potter and I was really looking forward to the seventh book. I was amazed by the creatures made by fantasy. My favourite was Dobby, the house-elf and I felt sorry for him died. I was not expecting Kreacher, house-elf of the Black family, would stand next to Harry. This book is much more inpredictable than the other six, because in those ones, there is something happening at the end, but in this one, from page 40, curses are everywhere. At the beginning of the book, Alastor ‘Mad-Eye’ Moody dies, at the end, Remus Lupin, Nymphadora Tonks and Serverus Snape goes in the right way and that’s why they die. Fred Weasley also dies and George loses his ear.

It is full of experience and turnings. In this world, almost everything is the same as in the real world. There was a war here in Iraq and in Potter’s world next to Harry. Harry’s wand breaks, Voldemort gets the King of Wands, one of the Deathly Hallows. It’s not good to make a wand from elder, because the King of Wands is made from it. It was Death itself who made it, with the Resurrection Stone and the Cloak of Invisibility. Harry has the cloak, Dumbledore has the stone and the wand. The Elder Wand belongs to the one who took it with violation from the owner, so it would be Draco Malfoy’s. Voldemort breaks Dumbledore’s tomb and stoles the wand. Dumbledore leaves a snitch to Harry that has the Resurrection Stone. He also leaves Gryffindor’s sword to Harry, but the Ministry doesn’t give it to Harry. The sword is a fake one. Harry founds the real one. How? If you want to know it, read it!