We kicked the ball together at Nagybajom 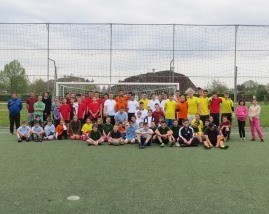 We kicked the ball together at Nagybajom

The long awaited second round of the Csányi Foundation’s football championship took place on 12th April.

Although the weather was cool everyone fought valiantly. The seniors contributed professional game play and the young ones defended bravely. The competition became even tighter. Now we’re all waiting for the finals which will be held in August on carrier day.