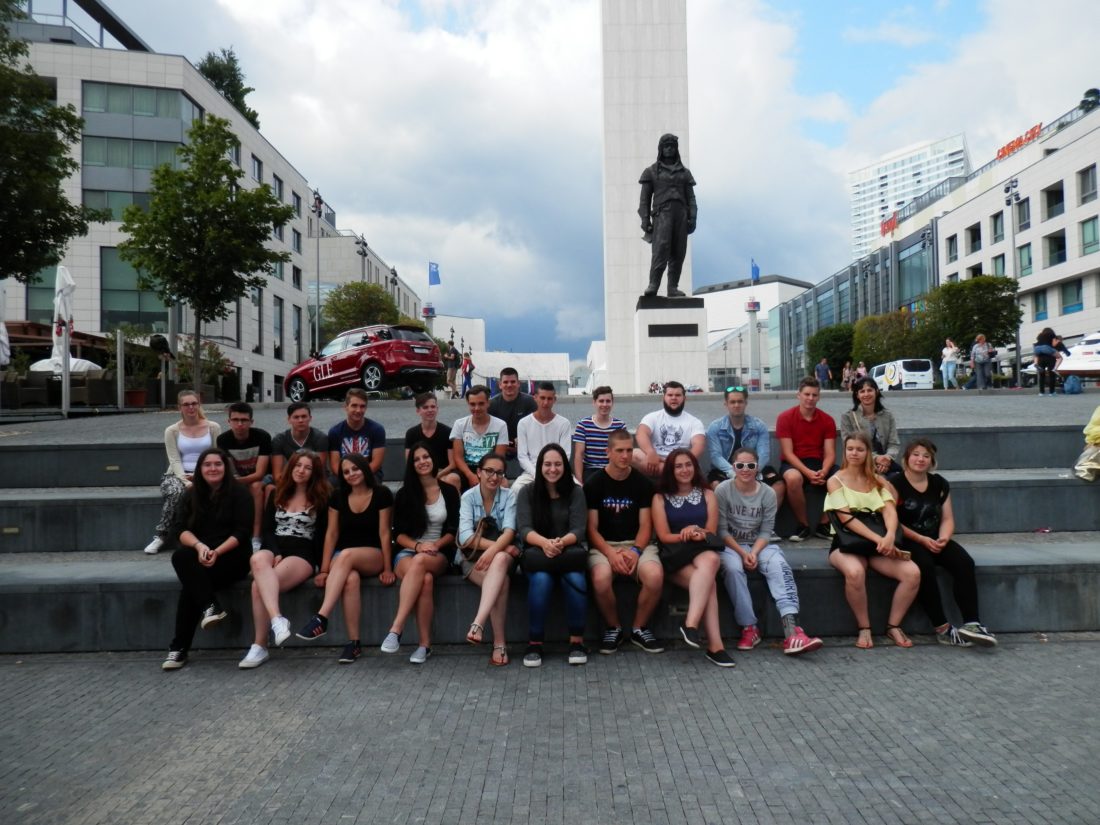 On the 27th June after a some hour long journey, we have arrived in Pozsony in Slovakia
Local Hungarian tour guide was waiting for us, Katalin Lehel.

We had lunch in a restaurant at the riverbank of the Denube, where we could enjoy the beautiful view of the River.  Then we had a walk on the bank, our destination was the newest square of Pozsony, the Eurovea. We really liked the fountains and teh National Theatre. After a little free time, we went to a special blue church, where we also heard the legend of Saint Elizabeth. Our tour guide was well-prepared from the history and the sights, so we can hardly wait to get to know more about this country.
Nikolett Sós, the volunteer

The second day:
After breakfast we visited the castle of Dévény. The fortress ruins is at the meeting of Danube and Morva. We heard about the history and legend of the castle. After Dévény, we continued our trip to Pozsony. We went to downtown by tram, where we saw the changing of the guards in the Glassalkovich castle. We had lunch on the Slovak Pub, which inside rooms represent the history and the specialities of Slovakia. We tasted our first kofola, which is a special slovak drink. Afternoon we visited the Prímás castle, and we checked the most important sights. Then we saw the oldest fountain. Then we tasted a delicious italian ice cream. The last destination was the Saint Márton Dome, which is named Coronation Church.
In the evening we lit some candles to commemorate our best teacher: Attila Ágoston

The third day:
In the morning the group continued the journey in the cave of Driny, which was discovered by the son of the inventor of the parachute, Stefan Banic. This is the only one attendable dripstone cave in the Little Carpatians. The diffent shapes of the dripstones were interesting. The 8 Celsius temperature was good in the schorcher. Then we visited the castle of Vöröskő, which was the seat of the Palffy family. The biggest cellarsystem of Central-Europe is in this four castellated renaissance fortress. The Frankeinstein film was set there. The furniture exhibition was amazing. We also saw the pharmacy, library, gun collection, art collection of the family. We had lunch in a cellar of a local family, which is an old ”lumberyard”. In the evening we had sport activities. By the end of the day we became pleasantly tired.

The fourth day:
After the breakfast we went to Joka, where we could see a mill. In the enthralling bank of the River Danube we drank a slovakian local drink ’vinea’, which was really tasty. Our tour guide orgenised a surprise for us, she took our group to a siberian tiger oasis to Egyházfa. In this farm live 23 tigers and 2 lions, this place is very similar to their natural habitat. It was a fantastic experience to see these ’big cats’ eating whipped cream. After the lunch, we greeted Bogdán Barnabás in his 18th birthday. After this we visit the Honismereti Múzeum in Galánta, where we saw the cultural values of the region. In the evening we baked crinoline and bacon for dinner. In the end of the day we played card games and watched football matches.

The fifth day:
Today we visited the most famous and most beautiful castle of Central-Europe in Bajmóc. In the past it belonged to noble families, it’s last owner was the Pálffy family. The amazing appearing fascinated us. Earl János Pálffy rearranged the whole building in the XIX century. Unfortunately the earl couldn’t see the results of the repairement, because he died before the end of the complete renovation.  Currently the collection of the Art History Museum is can be found here. The romantic castle’s style is similar to the castles built on the riverbank of the french river, Loire. We climbed 620 stairs and walk 1500 meters in the castle. from the tower until the cave we discovered everything. The fabled castle, where several films were set, amazed us. In the garden we sew a 700 years old limetree, where Mathias King also sat under. Then we went to Kistapolcsány, where we visited the classical castle of the Habsburg family, where we had our lunch. After this we went to the Mob of Lipica, where was a competition. The great programme made us forget about the long bus journey. Thank you, Katalin!

On the sixth day:
In the morning we visited the castle of Pozsony, which emerges 85m high above the Danube. In the capital city the Slovak National Revolt Bridge and the Saint Márton Dome are also at the same height. We were given detailed information of the history of the castle by our tour guide, and she also told us the legend of the dragon. Between 1552 and 1784 the Holycrown was kept on the oldest tower, the Crowntower. János Pálffy made the other towers built, then Terézia Mária completed the whole renovation. We all liked the castle, and the view of the Danube was amazing. Then we went to the downtown, where we saw the thinnest house, its width is about 130 cm. We were showed many interesting things by Kati, meanwhile we could eat very delicious ice cream again. After lunch we took part in a boat trip in the Danube. We docked in the aquifer of Dunacsúny, at Danubiana. This is the Muzeum of the Modern Art, which is currently exhibited the work of Joan Miró, and the KOBRA group. The works were interesting, and the place was amazing. Thanks for the wonderful week!