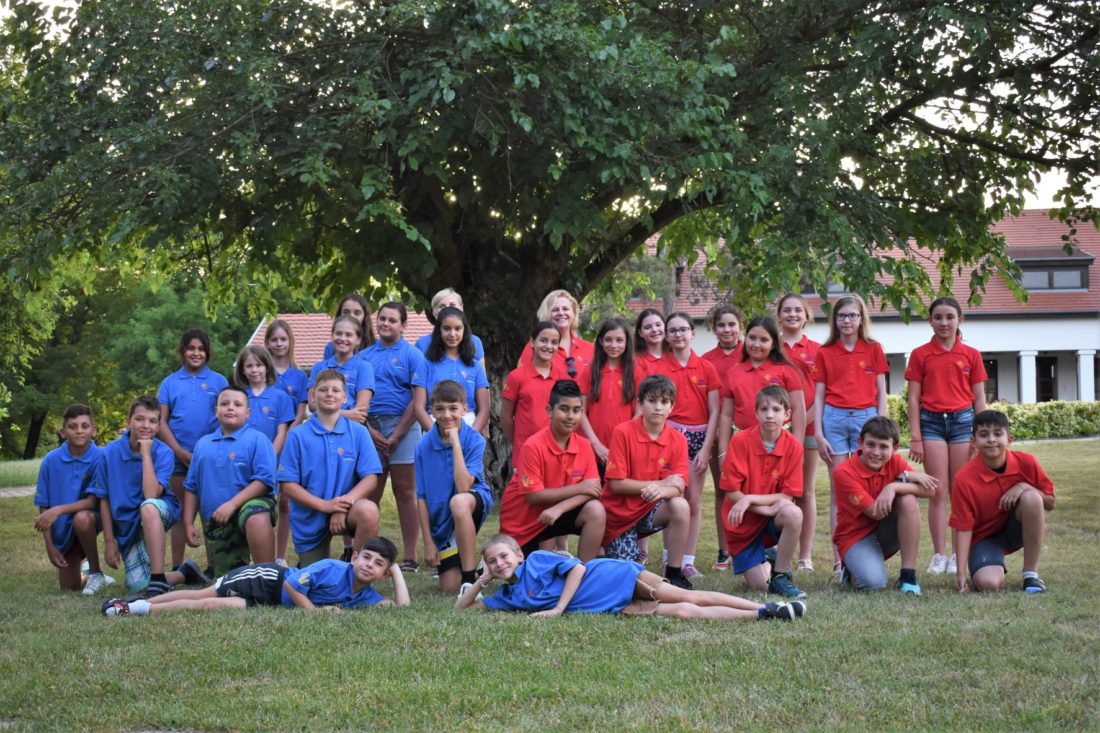 It’s amazing how much you can fit into a single day. On the first day of the Csányi Foundation’s Freshers’ Camp, we travelled, met, played football, went to the beach, did drama, talked, met, played games and had a lot of fun.

Two new groups started this year in the Csányi Foundation in Mohács and Kaposvár. From these two settlements came the enthusiastic small group, who were looking forward to this week so much that most of them couldn’t sleep the night before the camp.

On arrival, the little ones eagerly took possession of their rooms at the Sarlóspusztai Club Hotel, the site of the camp. After Erika Kovácsné Bodor informed the participants about the most important things to know, the activities started. On the first day there were drama lessons and board games in the evening, and in the afternoon the youngsters had a dip in the cool water of the pool.

On the second day, the children from Kaposvár and Mohács were also treated to many great activities in Sarlóspuszta. During the drama sessions, they got to know each other and themselves better through playful exercises, led by the two drama teachers Angéla Vancsuráné Sárközi and Zsuzsanna Vida. In the afternoon, the students had the chance to test themselves in a special Puszta Olympics. A games competition to see who could throw a pair of rubber boots the furthest, how fast you could find a needle in a haystack.  There was also time for an afternoon swimming in the pool.

In the evening, the young people took the Csányi Foundation oath and finally got to wear the Csányi T-shirt, which was handed over by Dr. Miklós Radoszáv, the Csányi Foundation’s operational director. After the solemn moments, the champagne toast was not missed, of course with champagne for the kids, and the group photo was taken, now in the brand new blue and red T-shirts.

On Wednesday and Thursday, the children learned a lot of useful skills in the learning methodology class with the help of Mrs Piroska Szabóné  André and the team-building drama lessons continued. In the hot weather, there was time for swimming every day, where some of the children even learned to swim with the help of the little mentors. In the evening, the team from Kaposvár and Mohács watched a movie.

On Friday, the groups learned the basics of first aid, including how to use a defibrillator. In the afternoon, fantastic flags were made in a craft workshop, and in the evening the youngsters had a short line-up competition.

On Saturday, the children enjoyed archery, horse-drawn carriage rides and shooting, and in the evening, the week was rounded off with a “Sarlóspuszta’s got talent show for the children. There was dancing, singing, joking, poetry,  and magic tricks, as well as animation and video.

And one team showed their drawings to a jury of mentors and mini-mentors. The only thing that overshadowed the good atmosphere of the evening was the journey home the next day. The children had a great time and were reluctant to say goodbye to each other and to the camp site, where they had spent a fantastic week.

Photos are available in the Gallery.