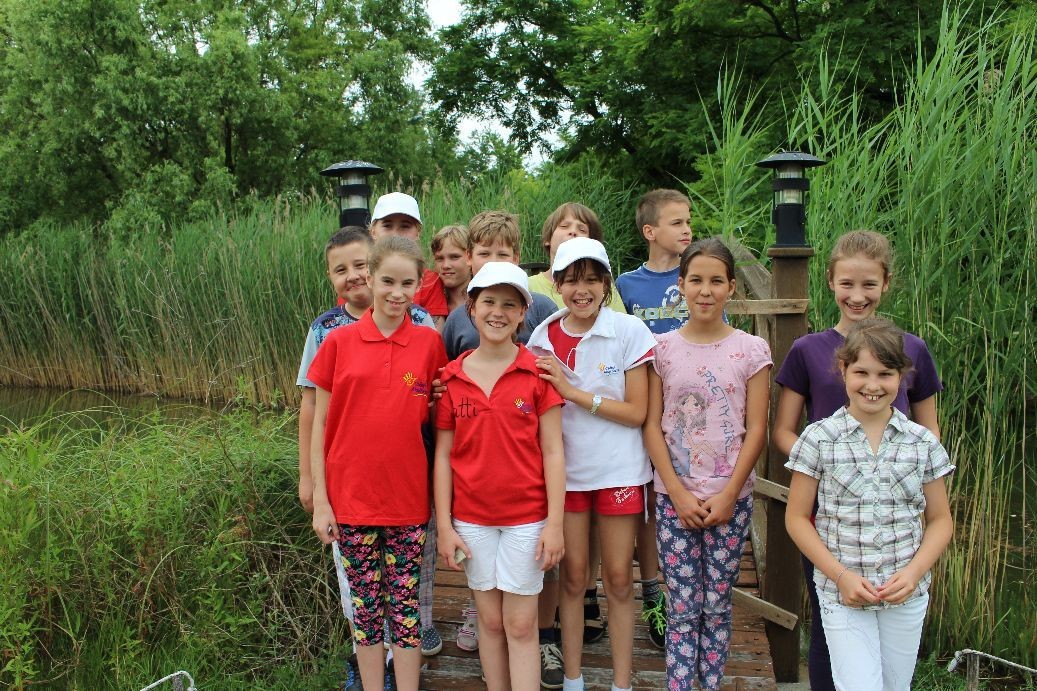 We are here again with the new members of the Csányi Foundation, in a hotel of Sarlóspuszta.

The first day – They were really excited, and they waited for the challenge ahead. On this first day there was not too much thing to do. We packed out, talked, and made new friendships. After the lunch we rendered the camp to the freshmen, while we were remembering for our last experience. The children were a bit nervous, so we tried to play something funny. Than teacher Piroska take a class called “how to learn”. The lesson was taken for the groups in shifts, while the others had some free-time. We had a lunch time, than teacher Sasa and Attila take a drama class in shifts. In this class the children could know each other better. After all this they didn’t need for a fairytale to sleep. Tomorrow new adventures will be waiting for them, and we are happy we can support them.

The second day – The second day of the camp started with a morning exercise. After that everyone had a delicious breakfast. The children had started the classes in two groups. One of the groups went to an adventure park where they could test their abilities. The other group could learn in a “how to learn” class. Thankfulness of the beautiful weather we could swim in the pool too. The most important part of the day was the resolution. We had an initiation ceremonie in which the young students became members of the Csányi Foundation.

The third day – Today we have a special rouse. We started our day with horn play. The morning continued with the regular gymnastics. During the forenoon the children took part in a training directed by the OTP Fáy András Foundtaion, where they could obtain financial knowledge. In the afternoon they had drama lessons, sports, arts and crafts. We finished the day with a show-case where they could perform and show their talent. Andalics Enikő, Kaposvár 2 junior mentor

The fourth day – This morning we heard beautiful bugle call for wake up. After the fresh morning exercise the children went to the drama class which was taken by teacher Attila, then the mentors spent some time with their groups. In the afternoon we had a great weather, so we spent it in the swimming pool. Later we went to a ranch by a kittereen. There we could taste the home made scone, jam, and syrup. We are really enjoyed it! We also organized a contest for the children. They had a really good performance, and we were happy to see them inspire each other. I think we all spent an unforgettable time. Their biggest experience maybe, was the moment, when they could lap up their mentors with toilet paper. Tomorrow will be the next exciting day here, in Sarlóspuszta, we are all looking forward to it.

Friday on Sarlóspuszta – This morning we had a beautiful sunshine to exercise in. In the morning the children were in drama class, artisan class and everyone could try the horse riding. They really liked these animals, and they were succeeding the orders completely. In the afternoon we saw an equestrian performance. The wranglers ordered to their horses to sit, and lay down, and they used their lashes to show us what the wranglers did long ago. This performance inspired our mentor Eszter, and one of our friend, Patrik, who were riding on a donkey. Today we could swim again, and those who couldn’t swim could learn how to by Enikő little mentor. On the end of the day everybody was sad because we knew we have to go home. I can say we all had an unbelievable and unforgettable time together.

Some children’s opinions:
“I’ve made a lot of new friends!” /Jázmin Pretz/ (Group: Kaposvár 2)
“When I stand on the horse, I feel myself free!” /Antónia Polgár/ (Group: Pécs 1)
On the obstacle race I felt I fall, but I was really happy when I’ve done all the races.“ /Fruzsina Borbála Székelyi/ (Group: Jászság 2)