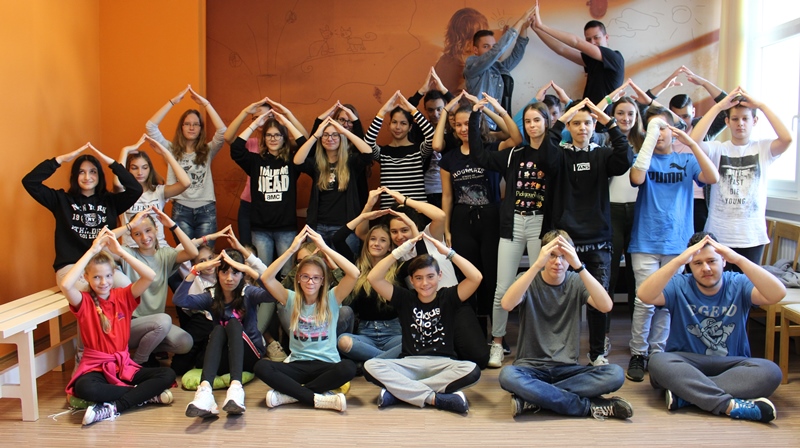 On the third weekend of October, after the language classes we finally began working on our first common project this year, titled ’Our Home in 50 Years’. All groups in the Community Centre took part, except for those students who had football commitments in Mohács or represented us in the Children’s Parliament. While the youngest students drew plans for their dream homes in the morning, the other groups warmed up with a drama class. Everything was related to the house in some way. We played fun games thinking about this topic. First we created relatively stable paper lighthouses, bridges and the flora around them. Then we dived into the differences between ‘home’ and a ‘flat’. While collecting words, we also realised how rich our language is: we found over 70 words which contain the word ‘house’ in some form. Then everybody described their ideal home in the form of a concrete poem, verses in the shape of a house or another related object. We learned about the process of building a house from an old acquaintance who is inspecting a nearby construction site, and, although all of us had some ideas about the subject, we were surprised to find out how complex it is, from the stages of work and the planning to the materials used and their costs. Following this our little group of scientists met for the first time – experts of computer science, maths and physics, who will make professional plans for ‘Our Community Centre in 50 Years’. The first point we considered was energy efficiency, we looked at different types of houses and households and we even arrived at a base idea, although I cannot write more about it now for spoiler reasons. We enjoyed the first project day very much, it was very interesting to visit a construction site, we learned a lot there and we can’t wait for the next occasion.