Adventures in Europe – On the Orient-Express tracks 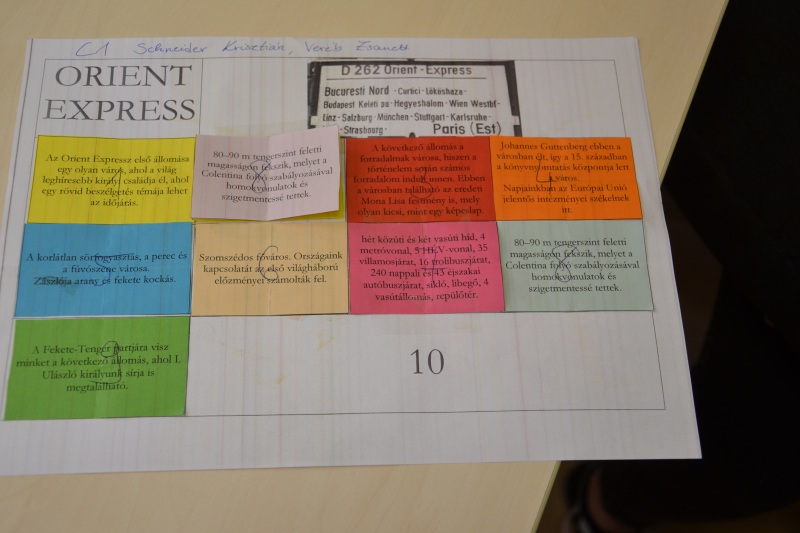 Adventures in Europe – On the Orient-Express tracks

“On the second weekend of May 2021’s first project-day took place within the bounds of Adventures in Europe. Once the austerity limitations imposed as a result of the pandemic were lifted, the Common House finally had a chance to come alive again. Pécs’s three secondary school student groups arrived enthusiastic and full of anticipation. The project’s fulfilment necessitated extensive planning, which included the developmental teachers’ original ideas and colourful content. The major direction of the day was formed by the Orient Express stops: London, Calais, Paris, Strasbourg, Munich, Vienna, Budapest, Bucharest, and Istanbul. Four oral stations, translation tasks, listening comprehension, reading comprehension, word cards, writing letters, history quiz, and 3D printing are all themed around traveling, Europe, and boarding/arrival.” Bálint-Orsós Andrea, mentor

“Today we had a one-of-a-kind project day titled Adventures in Europe. The Orient Express was the theme. The stations are named after the cities that the train passes through. Languages, history, and 3D printing were all covered throughout the day. At each station, we may complete tasks related to the cities. There was also a situational exercise, as well as listening comprehension, reading comprehension, translation, and a picture story. Everything was done in either English or German, depending on the participants’ knowledge levels. We could also complete a history quiz. This project day was also a success because the Covid problem prevented the three groups from spending quality time together for an extended period of time. We finished the day with a hearty meal.” The groups from Pécs

London (German): “The major aim was to present a picture story in England’s capital. After some preparation time, this was solved in a group effort, requiring cooperation and problem-solving abilities. It was amazing to see how their language and communication abilities did not change even after months of digital schooling. They did a fantastic job.” Czimondor Csilla, language developmental teacher

London (English): “I returned to the Common House full of joy and excitement, eager to see the kids again and spend the day with them. During the project, I was in charge of the London station, which included cooperative picture storytelling. They arrived in groups of 4-6 people, according to their language skill levels, to deliver a story. It was encouraging to see that not meeting for months had not prevented them from working well together and completing the tasks with good outcomes. The project’s objectives were met to the fullest extent possible.” Pap Tamás, language developmental teacher

Vienna (German and English): “It was encouraging to note that the kids’ language abilities were not harmed as a result of their digital learning during the short question and answer tasks and the situational dialogue activities. They responded impeccably and cheerfully, coming up with inventive answers during the situational exercises. They seemed eager to participate in the activities at each station, and it was lovely to work with the students again in person.” Jobbágy Kata language developmental teacher and Wensofszky Balázs, Pécs Group 3

“The kids arrived in Munich as tired, hungry, and thirsty travellers. In the Orient Express’s buffet car, they went into a restaurant to order food from a waiter and interact based on their language skills. The exercise’s purpose was to assign duties to each other while collaborating and bringing the group together during a situational assignment after a long period of time apart. They did a fantastic job on these assignments. Thankfully, their communication skills did not decrease during their time in online schooling. As a developmental teacher, it was a great opportunity for me to meet the students from other language groups. We had the opportunity to experience the thrill of reunion in a positive, gamified environment while conversing in our target languages.” Virág Judit, language developmental teacher

Istanbul (German): “During the debating exercise, which was about the benefits and drawbacks of various modes of transportation, I heard some excellent pro and con arguments. As a developmental teacher, I hardly ever had to interfere to spark their interest in new topics. The terms we acquired in Google Classroom to communicate our ideas and lay the groundwork for them all came up throughout these exercises, allowing me to gain feedback on their digital schooling experience, which made me very happy.” Czimondor Csilla, language developmental teacher

Paris – history quiz station: “The goal of this station was to present a brief history of the Orient Express from its beginnings through the twentieth century to its “last stop.” The students have learned about the historical context of the modifications on the various tracks, as well as the internal modifications in the wagons. Following that, a quiz about Paris was held in the second half of the lectures. The questions were interactive, in different languages, and they dealt with historical events related to Paris as well as specific Parisians. The students were able to answer practically all questions in groups, which resulted in positive outcomes due to some students’ extensive historical knowledge.”Gál András mentor, language developmental teacher

Bucharest – Debate station: “At the debate station, we studied oral subjects based on our language competence levels (B1-C1). The primary purpose was to discuss and summarise a specific topic. The majority of the children had prior experience debating and expressing their viewpoints. This benefited them in performing tasks efficiently with a variety of vocabulary. We met the purpose of our project theme, which was attained while also allowing them to improve their language skills.” Gál András mentor, language developmental teacher

3D designing and printing: “During our participation in the Adventures in Europe project, we designed and printed a board game. Countries with a connection to the Csányi Foundation, such as England, Germany, and many more in the vicinity, received special attention in this game. The innovative game was created using the Tinkercad application, and a few examples were printed on the Common House’s Craftboot printer on this beautiful Saturday morning. I believe our lectures were well-connected to the Adventures in Europe subject, and we will be able to increase our students’ interest in 3D printing.” Dlusztus Péter, developmental teacher