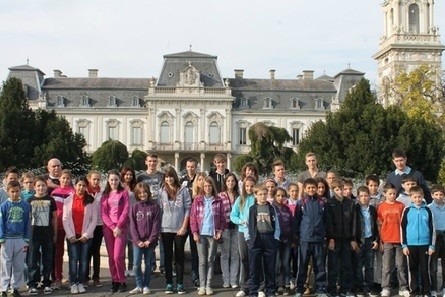 We went by a huge bus because the groups of Kaposvár and Nagybajom had to be squeezed into it. Around 9 o’clock we arrived to the first place of our trip, to Festetics Palace and the guided tour started. The founder was earl Festetics who had the palace built in 1745. His figure was carved from oak wood and exhibited in the hall of the palace. The portrait of his son, Festetics Pál, was made from mosaic by an unknown artist from Venice. The curiosity of the picture is that, it looks like a painting from the distance. As we walked on we got to the well-known oak staircase of the palace. Here, we could see paintings of famous members of the family and about the friend of the family, Maria Theresa. Behind the stairs we were in a long hallway. Here we could see three china vases and only fifteen were made all over the world. In the palace there are five of them. Furthermore, here are the portraits of Festetics György and his role model, Zrínyi Miklós. This part of the building was built and decorated in romantic style. Then we got to the green drawing room. This room shows the family’s enthusiasm towards horse breeding. A painting with prize winner horses that used to belong to the family also shows how seriously they thought about these animals. The frame of the painting holds the names and breeds of the horses shown on the painting. It is important to mention here that this family brought the Arabian horses and the Thoroughbred into Hungary. Following the green drawing room we went to the red salon. A beautifully carved fireplace waited us here. In front of the fireplace a granite statue of a dog lies, the favourite Dachshund of Hauzwig Mária, György’s wife, and above the fireplace hangs the life-sized painting of her. The second most famous place in the palace is the library. There are more than 50000 volumes here. There are many German, English and Latin books. From here a narrow foyer takes us to the office room. Books that were read and examined by the earls were here. Later we got to the beautiful chapel. Here we could see the painting of a priest. He was from a poor family but the Festetics family mentored and helped him with money. Due to this he got the highest rank in church in Hungary, he became cardinal. From the chapel we went through many smaller rooms where the children might play, the men could play cards or the ladies could sit down and enjoy a cup of tea. The last and the greatest room was the ball room or mirror room.  Concerts and weddings are still held here today. This was the last station of our guided tour. From here we went to the Windischgratz, Széchenyi and Kittenberger Hunting Museum. We saw many beautiful and interesting animals, of course, stuffed ones. There was only one animal that was not killed by a hunter, a Siberian tiger, which was given to the museum by a zoo. It died naturally. After the museum we went to have lunch: meat soup with liver dumplings, meat in coat with spaghetti and the best part, the dessert, pancake. After lunch we headed back home full with memories and tiredness.
Párkányi Boriska K3