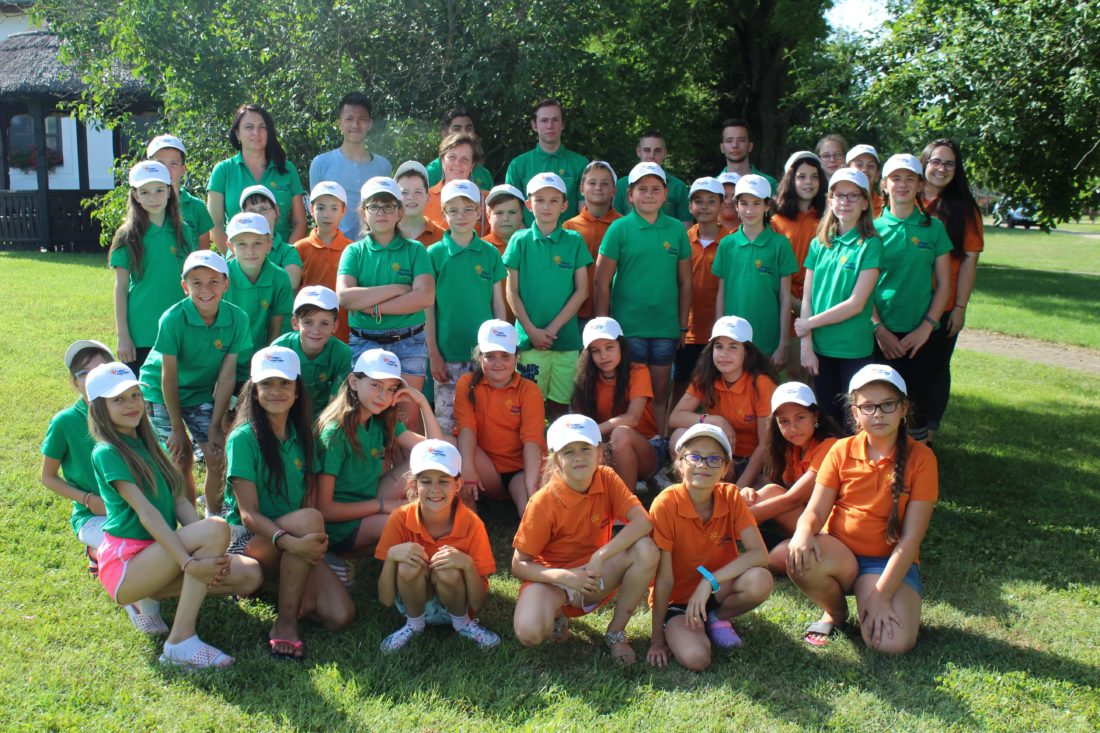 On this day we have arrived to Sarlóspuszta. After so many years, we still feel utterly happy about coming back to this place. The new groups have came to this place for the first time, so they were quite surprised, but even more astonished about the place. After packing out, we have started our time there with a delicious lunch, a hungarian traditional, which our volunteer really favored. Afterwards, we showed the kids around the new place, and we were reminiscing about our best moments for our freshmen. Then we presented them about ourselves, so that they can get to now more about us. The volunteer, Roger, introduced himself and his home, Hong Kong in a nicely prepared presentation. He emphasized the uniqueness and the differences of his living place, compared to Hungary. The children were really active, thus making the presentation even more enjoyable. For last, we did sports activities, in which we got exhausted enough, to eat our delicious dinner, and then call it a day for everybody. All in all, it was an awesome way to open up our trip.

After our tiring first day, we woke up energized. We did our first morning training as well, and we had a lot of fun doing it. After the breakfast we began having our study, handcraft and drama courses. The children were excited about the classes, and fortunately everybody enjoyed them in the end. After lunch, we had a little time to get some rest, then the two groups had time to play board games and swim in the pool. Our new volunteer Ksenia gave her presentation about Russia after the afternoon activities. The children were pretty interested in learning something new about the Russian culture. Then came the highlight of the day, when the freshman swore an oath to the foundation. This moment was just as beautiful as it was to us 10 years ago. Then after dinner, we finished our day doing some sports, and everybody went sleeping with a wide smile. We hope that the rest of the days will be just as good as this

To be continued… We woke up here for the second time on the camp. We are getting used to the morning wakes from Gergő and Bence. After the training came breakfast, as yesterday. After breakfast we learned how to handle bows, and guns. Our helpers assured that we are being safe all the way, and we did really accurate shots with their help. The others, who didn’t want to shoot, were jumping in a trampoline. The other group was watching a movie in the meantime, so they prepared for the afternoon swap. After lunch the switch happened, and Szeged was watching the movie. After those activities, we took a dip in the pool, which felt very good on this hot day. Since we fancy rivalry, we competed each other in No War. Epic battles took scene on the grassy, forested field. In the evening, we had a great time doing a got talent show. We had aceobats, gymnasts, ballerinas and singers as well. But not only the kids, but also our volunteers contested with a song from their home country. Then came our helpers, with a less well-sang, but rather enthusiastic Hungarian song. And the event was closed up with Zoli and Piroska’s dance for a Hungarian classic song. After all these awesome events, we all went to sleep exhausted, and fulfilled with joy.

An eventful Wednesday We started our day with our usual routine. After waking the kids we headed to the sports field for our morning exercise. After breakfast, the kids have been on a first-aid education, which lasted till lunch. They mastered the tricks and techniques of life saving. Here I could practice my already learned skills. After we finished, we headed out to have lunch. After lunch the greenhorns had drama and learning skills classes. In the second half of the afternoon, we took care of kids during various sport events. We played with them at the pool, we played football, basketball and badminton together. Afterwards, we headed out to have dinner, which was followed by a fun handy crafting course. We have made beautiful dream catchers together. After an eventful day like this, we had to get some rest and prepare for the follow up tomorrow.

As usual we began our day with some morning exercise. Gergő held it for the kids, and they enjoyed it a lot. They played dodgeball and it was a lot of fun. After breakfast there have been learning skills and drama classes for the groups, in which Roger was involved. Kitti was his interpreter this time, so Roger can enjoy the classes way easier. After classes the children had some time to finish the dreamcatchers they started last night, or play some games such as table tennis or darts. In the afternoon the kids were given an opportunity to play board games with Roger, mixed with some English study course. He created some interactive games which helped them learn English vocabulary. Of course, going to the pool could not be skipped, as it was a very hot day yesterday. During afternoon, our foundation’s operative director, Miklós Radoszáv has honoured us with his presence, and even joined our programs. He mounted a chariot with the children which easily was the highlight of the day. Finally came the main event of the day, the sport race. Marcell prepared a really great, interesting and tiring game plan, where 3 mixed teams competed for glory. Everyone tried to perform at their best. And it really was a close race. Everyone got tired so quick, that falling asleep meant no problem for them today. It feels really great, that they look up to us, and see us as role models.

6th day We have arrived to the last day of the camp, and as always, it was also an eventful day. We added a countryside olympics and a skill competition to the usual sport and pool programs, organized by my helpers. The photos in the gallery show us how the events went down. The success of the camp was greatly helped by my colleagues, volunteers, and my helpers. I owe them a huge thanks for everything they have done in the past week.