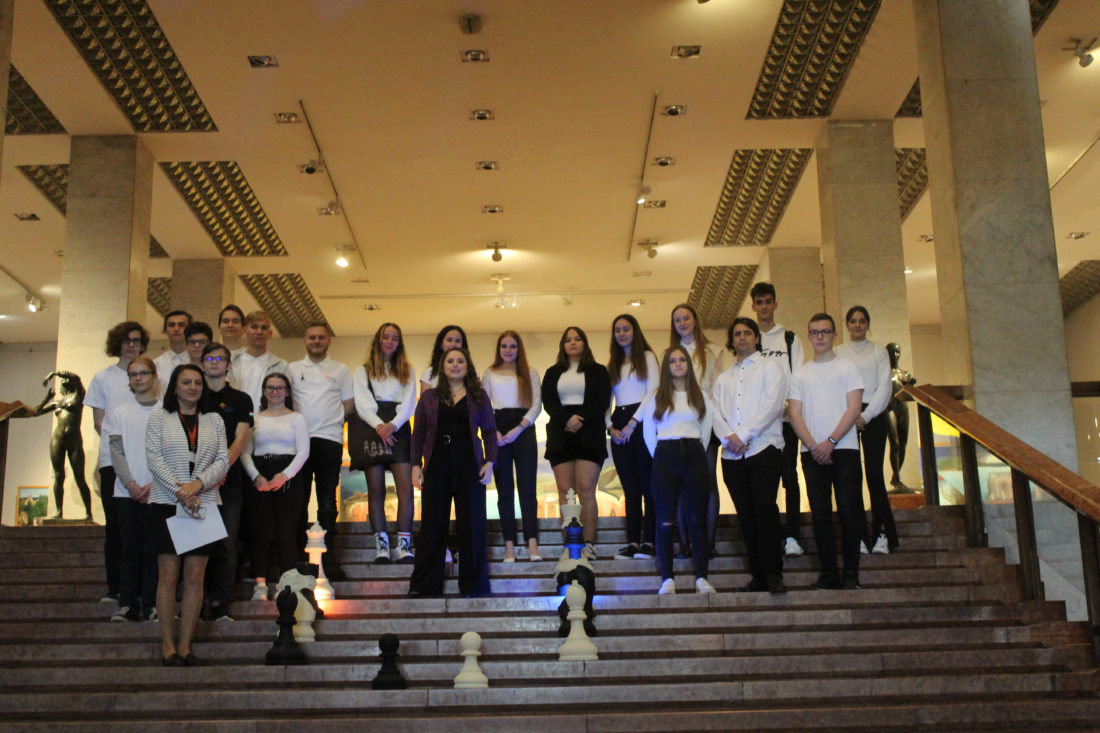 ON 8 OCTOBER, THE HUNGARIAN NATIONAL GALLERY WAS DRESSED IN BLACK AND WHITE. IT WAS A CHESSBOARD EXPERIENCE: 64 SQUARES WITH 10¹¹¹ POSSIBILITIES. THE JUDIT POLGAR CHESS FOUNDATION AND THE GLOBAL CHESS FESTIVAL WERE ASSISTED IN THE SMOOTH RUNNING OF THIS PROGRAMME BY A TEAM OF VOLUNTEERS FROM THE CSÁNYI FOUNDATION, MADE UP OF 32 SUPPORTERS. 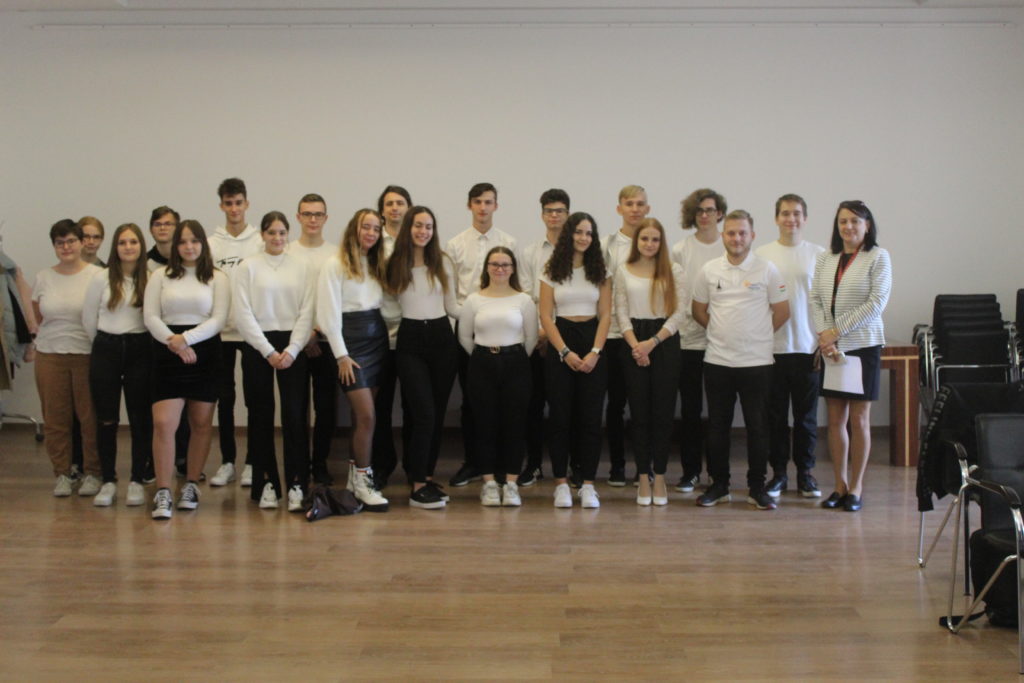 2022 is the Year of Women in Chess, and indeed: both WIM Zsóka Gaál and GM Judit Polgár dominated their simultaneous exhibition like queens. In the meantime, Spanish-Swedish WFM Anna Cramling, just half a floor above, gave live broadcasts of the “executions” of anyone who dared to sit down on the chair that was vacated every 10 minutes. Anna didn’t always succeed though, and two players from our Foundation managed to outdo the master: IM Gellért Karácsonyi and Krisztián Schneider. 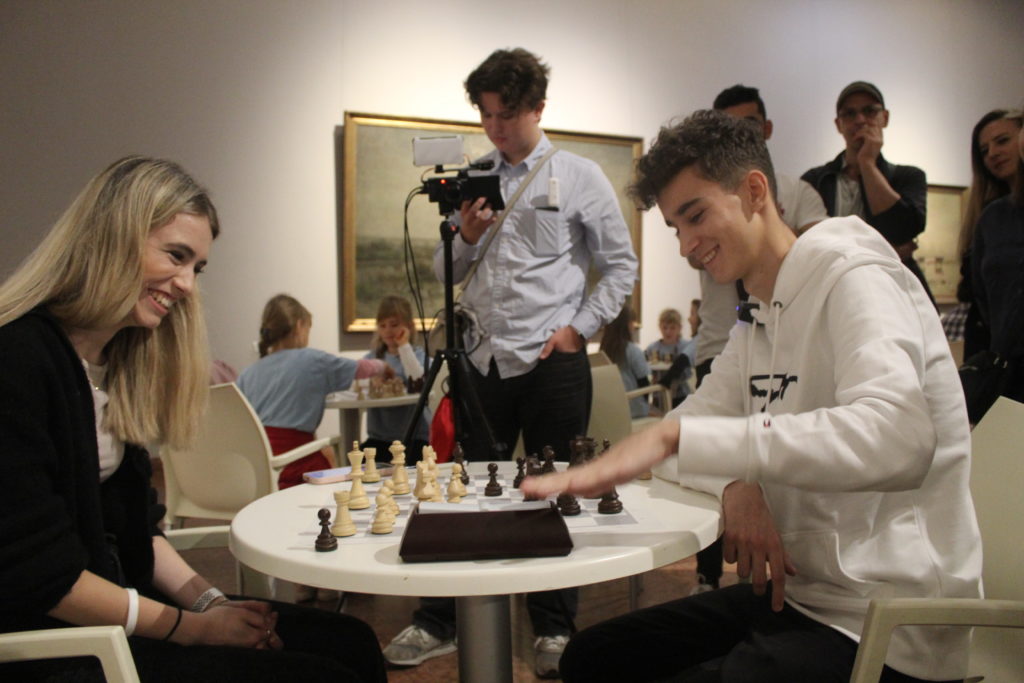 “I made a poster of Pia Cramling together with Viktória Füle (Jászberény Group 2) for the competition organised by our Alumni and Judit Polgár, and we came in third, so for us, the most memorable moment of this year’s Festival was meeting and playing with Anna Cramling, the chess player’s daughter. What’s more, I even came out as a winner! In addition, it was a great experience to play with WIM Zsóka Gaál during her simul. In his analysis of the game, the Israeli GM Kogan Arthur praised the game, which is a huge compliment.” Krisztián Schneider, Pécs Group 1 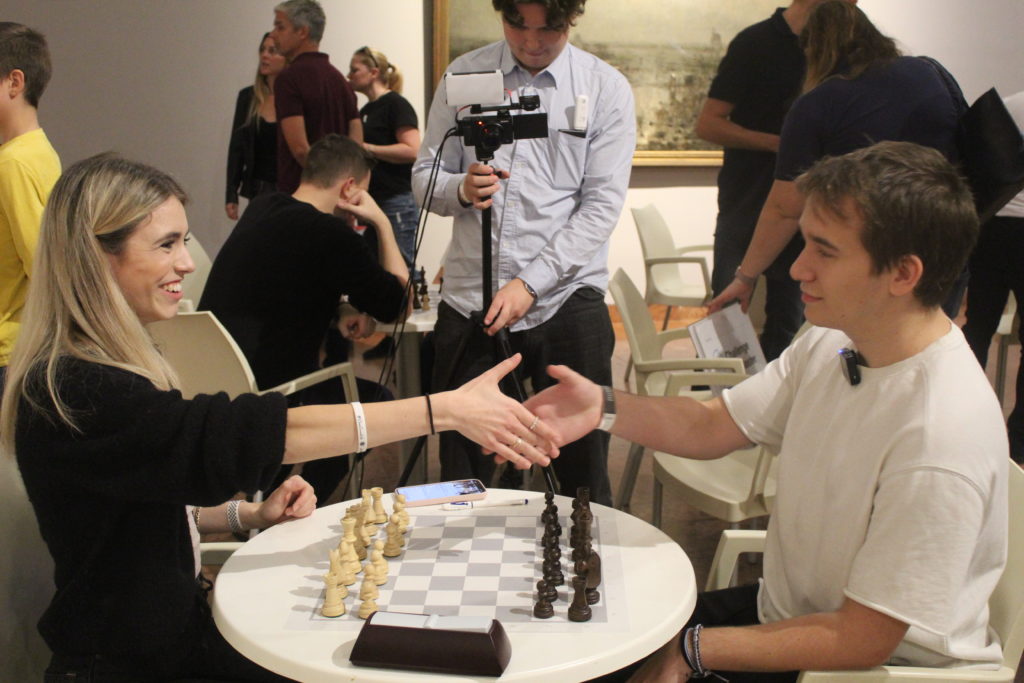 Besides Krisztián, Richárd Nagy of Pécs Group 2 also took part in the simul against Zsóka Gaál, while Bánk Kohári of Szeged Group 3 had a chance to test himself against GM Judit Polgár, where he was beaten by the Grandmaster after a tough game. Judit Polgár’s simuls were analysed in person by GM Anish Giri, who is currently the seventh strongest player in the world. 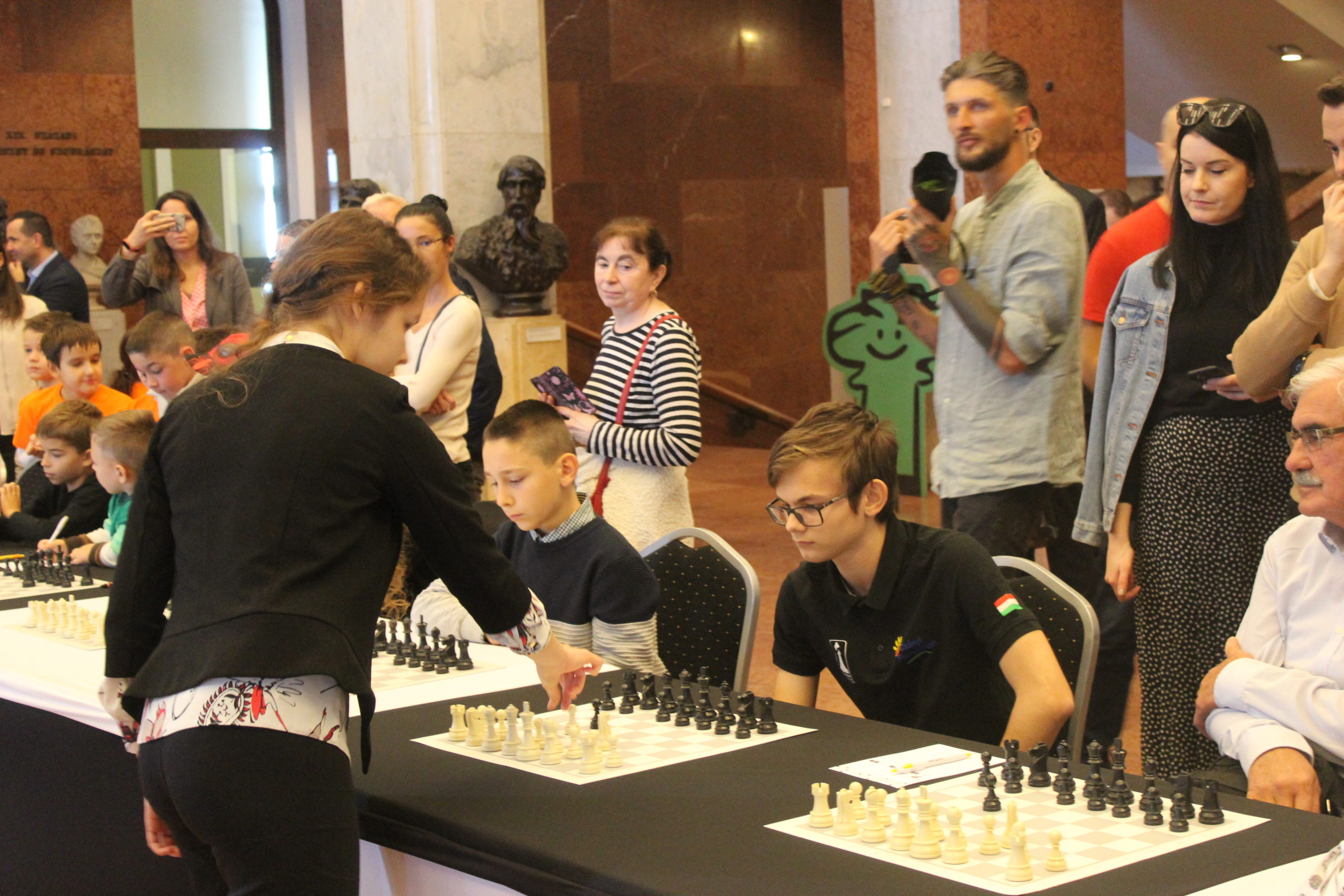 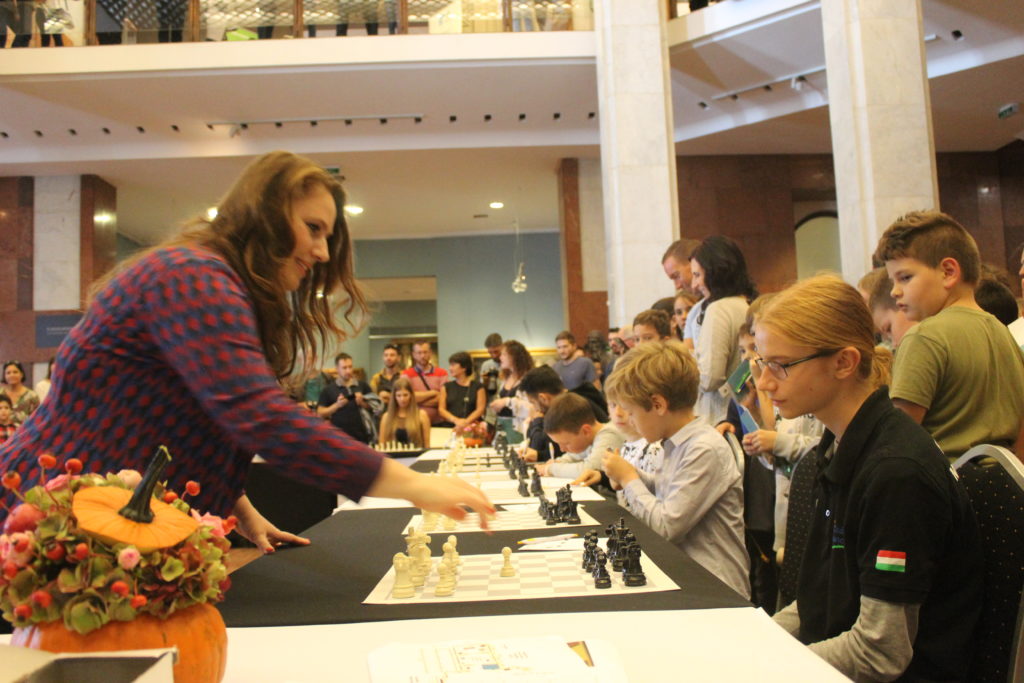 While the simul took place on the first level, the semi-floor featured a Twitch broadcast by Anna Cramling, while the Morgan Stanley booth was dedicated to robotics and chess challenges. In the dome, the world had narrowed (or expanded?) to 64 squares, and apart from the clicking of the clocks, only the muffled murmur of the Chess Festival filtered up to the Chess Challenge tournament, where Gellért Karácsonyi and Kata Karácsonyi were helping out, and rooting for their siblings; Luca and Bánk.

“The Chess Challenge tournament was held in 2 groups, one in the morning and one in the afternoon. It was a fun arrangement to have 64 chess players at the table in each stage. In the 5 round tournament, players were given 8 minutes to think, with a bonus time of 3 seconds per move. Imre Bartók won the morning competition, while in the afternoon, Bánk Karácsonyi from the Csányi Foundation Chess Team won with a convincing 5/5 points. The Chess Challenge tournament was a high quality, exciting game, and the atmosphere was really good!” Gellért Karácsonyi, Jászberény Group 2 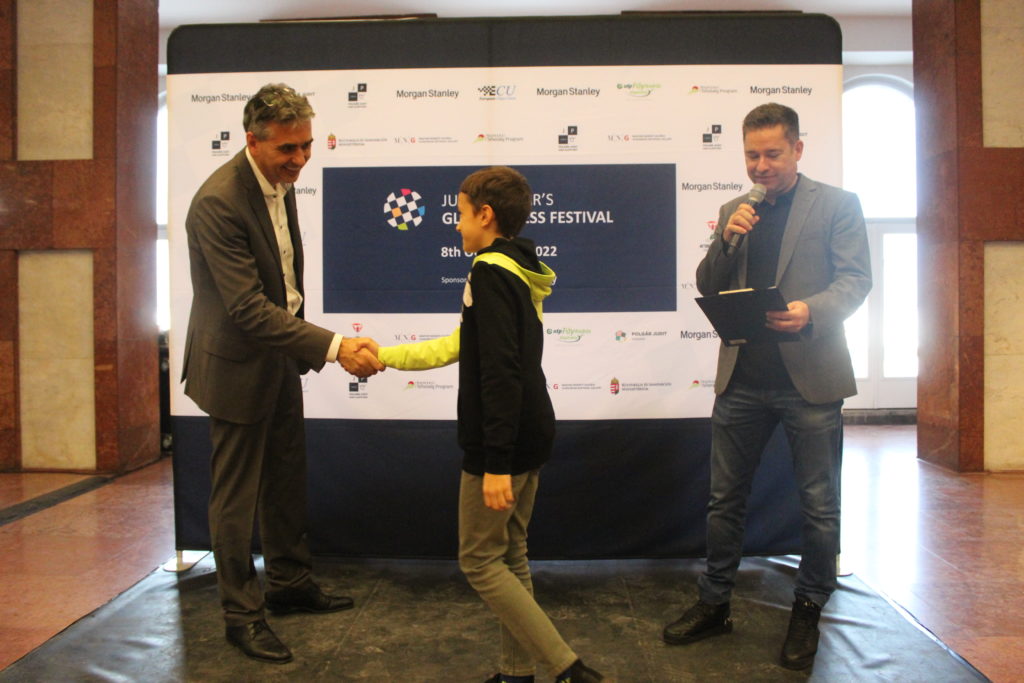 The Foundation’s students dominated not only the chess boards, but also the stage, where the results of the joint competition were announced. In the 5th grade category, Kara Allen and Seth Allen, Klaudia Kecskés Kíra Klaudia and Dorka Daczó received their prizes, while in the high school-university category, Levente Lassu, Gellért Karácsonyi and the pair of Viktória Füle and Krisztián Schneider were awarded by Zsófia Polgár.

Besides work, there was no shortage of fun: the Kaposvár 1 and Mohács 1 groups also visited the event, and in addition to chess, they could test their logical and coordination skills at the various stands. 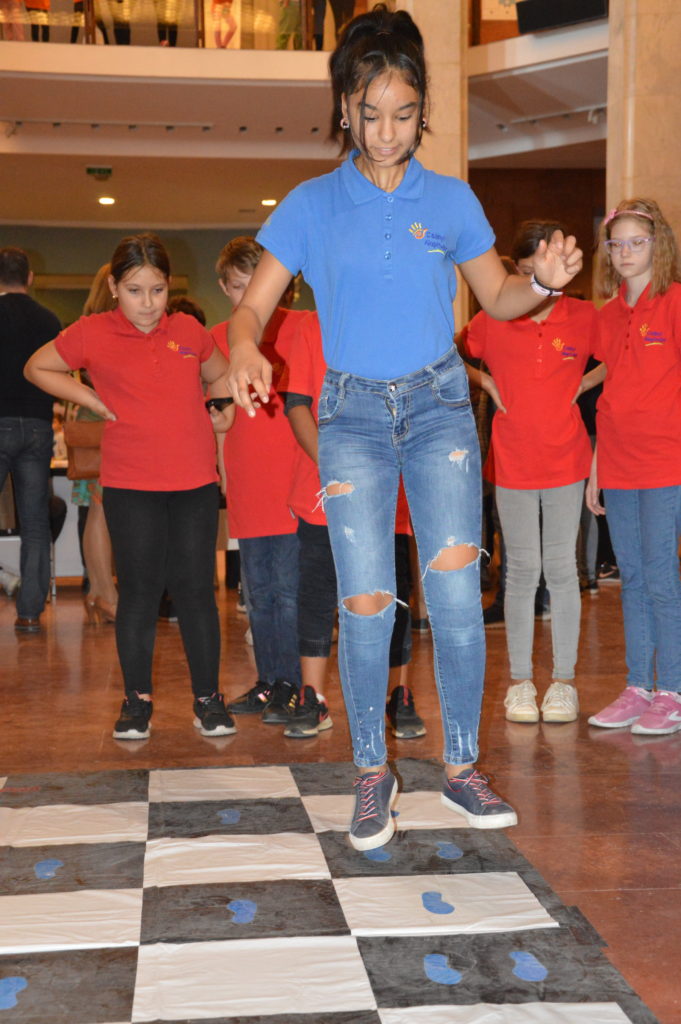 “I travelled to Budapest as a mentor assistant to accompany the new members of the Kaposvár group 1. In the morning, we visited the Tropicarium, where the youngsters were amazed by the extraordinary wildlife. Afterwards, we walked through the Castle Garden and entered the Hungarian National Gallery, where the Global Chess Festival was taking place. After a short free time, I was awarded the first prize for my essay on the “Women in Chess, Women in Science” competition, a huge and impressive carved chess set with a card signed by GM Judit Polgár. After the prize-giving ceremony, I accompanied the group members, who played through the scoring exercises with great enthusiasm.” Levente Lassu, Kaposvár Group 1

“Today we participated as volunteers of the Foundation in the 8th Global Chess Festival, which took place in Budapest at the Hungarian National Gallery. The main aim of the event was to promote chess to a wider audience. It also gave children the opportunity to try the game and improve their skills. The festival was divided into several stages. The work proved to be useful and enjoyable, as there were several people from abroad at the festival with whom we could only communicate in English, so we were able to practice and improve our language skills. There were several tasks such as: briefing guests, working with children, taking pictures of the participants and activities around the stage. We thank the Foundation for the opportunity and hope to participate in the event again next year.” Balla Melodi, Barkóczy Zsombor, Nagy Richárd, Zsagár Alexandra Pécs Group 2

At the end of the day, the Csányi Foundation’s volunteer team left with a lot of new experiences and tired satisfaction (although the chess boards were found again when they got home).

See you again next year!

Check the Gallery for more!