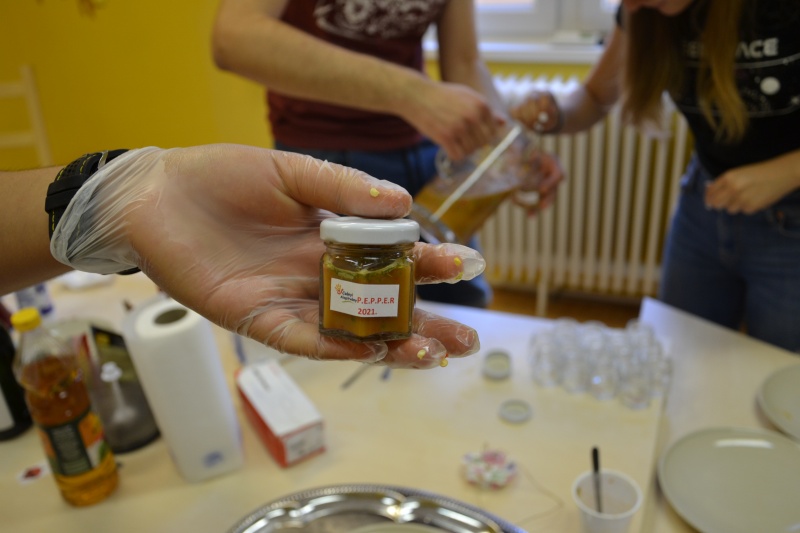 On the 28th of May, the groups from Pécs were able to complete the P.E.P.P.E.R. project, which they began last year but had to postpone due to the pandemic. The goal of the day was to learn about and taste the pepper pods, which are the most valuable parts of the pepper. Capsaicin, an essential alkaloid that makes the pepper spicy, is a big component of the pod. Many people are unaware that it is also a significant medicinal component, and that it has long been recognised to have positive benefits. It’s utilised as an anti-inflammatory, pain reliever, antibacterial, blood pressure regulator, and metabolism booster. Because raw pepper can only be consumed by a few people, it must obviously be processed properly. As a result, the children processed the pepper in three mixed groups, in three different workshops: they created chili-chocolate and chili sauce, as well as collecting chili recipes. They could taste chili-chocolate bonbons and chili sauce by the end of the day. Every student could even take home a uniquely seasoned hot sauce made from their own recipes that could be utilised in a variety of foods.

We hope the kids learned about an essential spice and herb and will be courageous enough to utilise it to spice up their meals.

The mentors from Pécs

Today, on May 28th, we were able to resume our previously begun P.E.P.P.E.R. project, which had been put on hold due to the pandemic. We began by discussing what had happened to the plants we had begun to nurture the previous year, and then we took our positions in the workshops. We made different unique sauces from chili pepper in one of them, while we melted chocolate in the other one which was spiced up by chili flakes. We also collected some chili-related recipes in the third one. In one, we used chili pepper to make a unique sauce, while in the other, we melted chocolate that was seasoned with chili flakes. In the third, we gathered several chili-related recipes. We were given the opportunity to sample the hottest peppers, which were served with milk to drink as a precaution. The boys were the boldest, tasting the ghost pepper for the first time. The beauty and power of these peppers made everyone’s faces flushed and reddened. We came to an end of a joyful day in which we were able to sample some culinary delights. Thank you to the Foundation for bringing us together for this afternoon!

The groups from Pécs