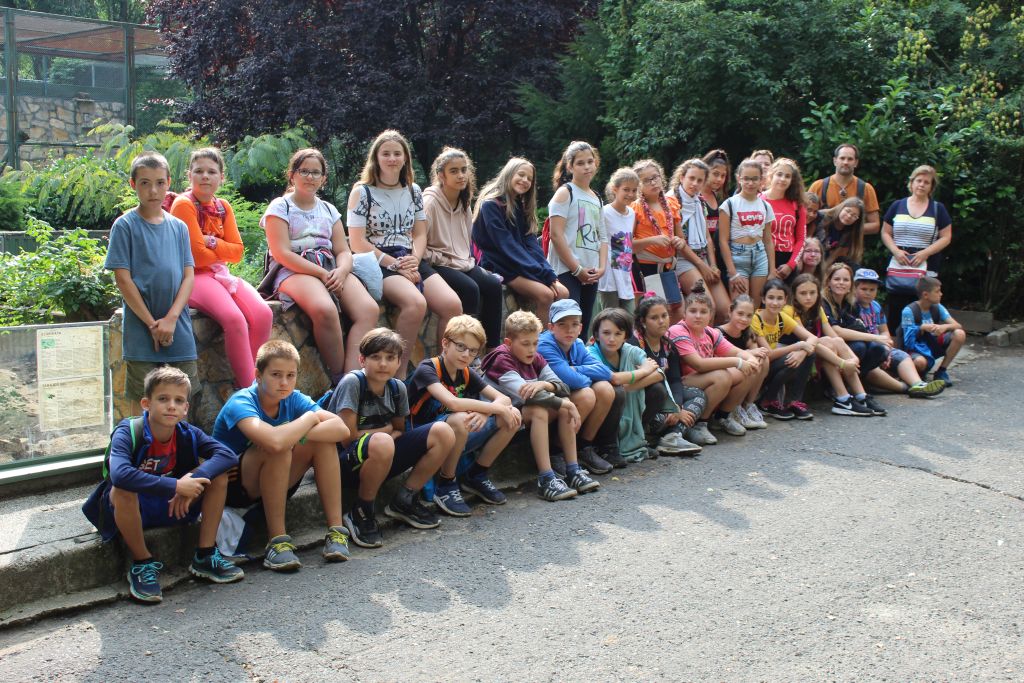 “The 4th group of Jászság met on the morning of Sunday (08.16) in the yard of the Jászberény Community House. From here we went on to our accommodation in the Old Forest near Jászberény, where we were later joined by the Szeged 3 group with their mentor Uncle Zoli, whom we were waiting for with great excitement. We occupied the accommodation together and had lunch. After lunch we took part in a very exciting adventure tour. We walked to the site with the help of our guide, Aunt Zsuzsa Lukácsi, to their beautiful house, which had several hectares of land. Plenty of pets were kept (horses, ducks, geese, poultry, dogs, cats), but we also saw a fish pond with small fish swimming, frogs creaking on the stone. We measured ourselves with various skill games at the Pagony Olympics, which was also assisted by the small mentor Kitti Kispál and the volunteer Kinga Király. Tensing our muscles, we solved the tasks with sweat on our foreheads (slalom, pushing a wheelbarrow with a ball, stepping forward on two cardboard sheets, with a mini bottle because of water and pouring it into a large bottle). Unfortunately, the tug of war was washed away by the sudden downpour. The homemakers treated the tired teams with delicious lemonade. Then in the afternoon, during the informal free session, we talked to the group of guests, recalling the memories of last summer. In the evening, we discussed the next day’s program during dinner. We soon came to rest because we were waiting for the colorful programs organized for the next day. ”

After eating lunch, it was possible to make a door decoration in a creative session with the help of volunteer Boglárka Kohári-Nagy. In the early afternoon we were visited by Uncle Miklós, the operational director of the Foundation, for whom we made a balloon decoration, we showed him our accommodation, we told him about our previous and later programs. We spent the rest of the afternoon at the Eagle Center, where Uncle Tibi was waiting for us and led us around the area, during which we were enriched with a lot of information. We learned, for example, that they are caring for injured, sick birds, an owl, a hawk, and even a wildcat struggling with mental disorders, who was just eating a rabbit while we were there. Then we sat around the yard and Uncle Tibi brought us smaller birds. One of the owls could also be picked up, and the others were stroked and examined more closely. We ended the afternoon with a tour where we got to know and taste different plants and also learn why not run on the saline ground. We went back to camp pleasantly tired. ”

“On Tuesday, we had fun and interesting financial knowledge and drama classes again. Then we went to the Jászberényi Zoo and we had half an hour of free time before lunch, during which we played on the beautifully renovated playground. We waited for Aunt Laura, who is an avid caretaker of the zoo. After introducing ourselves, we went to the swampy part, where there was a visual feeding of pelvics and wild boars, which both groups liked alike. We went to the llamas, alpacas, and the horse we also fed. Later, the red pandas were introduced, and then we fed the meerkats with flour wormwood. Some of us even threw it away when Aunt Laura put it in our hands because she was very tickled. The bearded bears were fed raw eggs, there were some who managed to throw them in without breaking, so we could see how deftly they break up and lick out the inside of the egg. We also went in to the kangaroos and fed them vegetables. We could even see a cockatoo greeting us with Hello and entertaining us with a great production, dancing, walking upside down and even bowing. At the end of the day, there was an hour and a half free program that most of us spent on the super playground and then went back to the accommodation. ”

Wednesday was the last day of our training in the old forest, when lunch was cooked in a cauldron by the parents of Jászság who arrived at the venue. While lunch was cooking, we had a number war, which we really enjoyed, the result was a draw. When the delicious goulash soup was done, we had lunch, ate the many cakes the parents baked, and said goodbye to each other. It was a very good day with many programs, we hope to have many more joint programs with the people of Szeged. ”

“At first I had doubts that it wasn’t going to be that good, but then there came better and better experiences. In the evening we talked quietly with one of my girlfriends and the ending was always good and fun. The helping hands are very strong, helpful, kind, funny. I filled myself with a lot of experiences and information. I think I could say it was one of the best camps. ”

“I think the camp was very good. I made a lot of new friends with whom we got along very well. On Sunday, when we arrived, we visited a nearby farm, where I also had a new experience and took part in the Pagony Olympics, in which we competed in teams. On Monday we visited the Eagle Center where we met all kinds of birds. On Tuesday we went to the zoo where we met a lot of animals and also had the opportunity to feed some animals. I also stroked and fed a kangaroo, although they are quite afraid of people. Wednesday was a cauldron and a number war, so the last day passed quickly. I’d love to come here another time. 🙂 ”