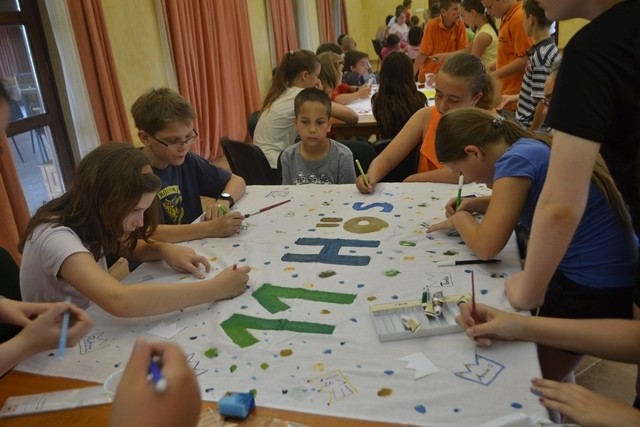 We were very excited in this morning when we started to go to this summer camp to Sarlóspuszta.

First day: We all have pleasure experiences from the last year camp which was our first week together. Group Jászberény2, Kaposvár2 and Pécs1 came with six small mentor who try to help the children well. On the first day we started with drama lessons after we played a lot with eachother. The memebers of the camp allocated new rules and they are trying to accommodate to everyone. Tomorrow we will have an exciting program with OTP Fáy Foundation but we are also looking forward to the drama lessons and we hope the weather will be nice and we can swim together.

Second day: After the morning stretch we have started the day with a delicious breakfast. Some of us could participate in drama class or financial studies. After lunch we could have join some programs like dancing, art making and sports which were provided by little mentors. In the aftenoon we could jump into the pool for an hour because of the nice weather. We played „counting war” in the sunset,which were so exciting, and we also ate ice cream at the end of the day.

Third day: We were so excited after the great breakfast, becasue we had a lesson with OTP FÁY Foundation again. We were studiing financial issues. Nevertheless, the lessons finished quickly, because we had am educational time, after lunch group Kaposvár 2 and Jászság 2 had drama lessons and Pécs 1 had lesson with their mentor. In the afternoon children could do some sports and manufacture some small mascots. Everbody jumped into the swimming pool. we were so excited and turned up in front of the tv screens to cheer for the Hungarian National Eleven versus Portugal bests. After that we had dinner which was as delicious as it used to ne. The groups went on walking to the lake and we had a pleasant time talking to eachother. We are looking forward to playing with eachother and hearing when a great time tomorrow.

Fourth day: The fourth day in the camp started in the same way as it used to be: the gymnastic in the morning was changeable because the small mentors were so fit. Everybody were waiting for the shooting and for the games outside. The groups were swimming together in the warm weather. In the evening the children were playing with eachother and the mentors also helped them. It was a hot and pleasant day and we are looking forward to the programs tomorrow.

Fifth day: After breakfast we started to paint flags which were belong to different groups for an Olympie game. We jumped int he pool and ate ice cream. After dinner we danced in a little disco which everyone enjoyed.