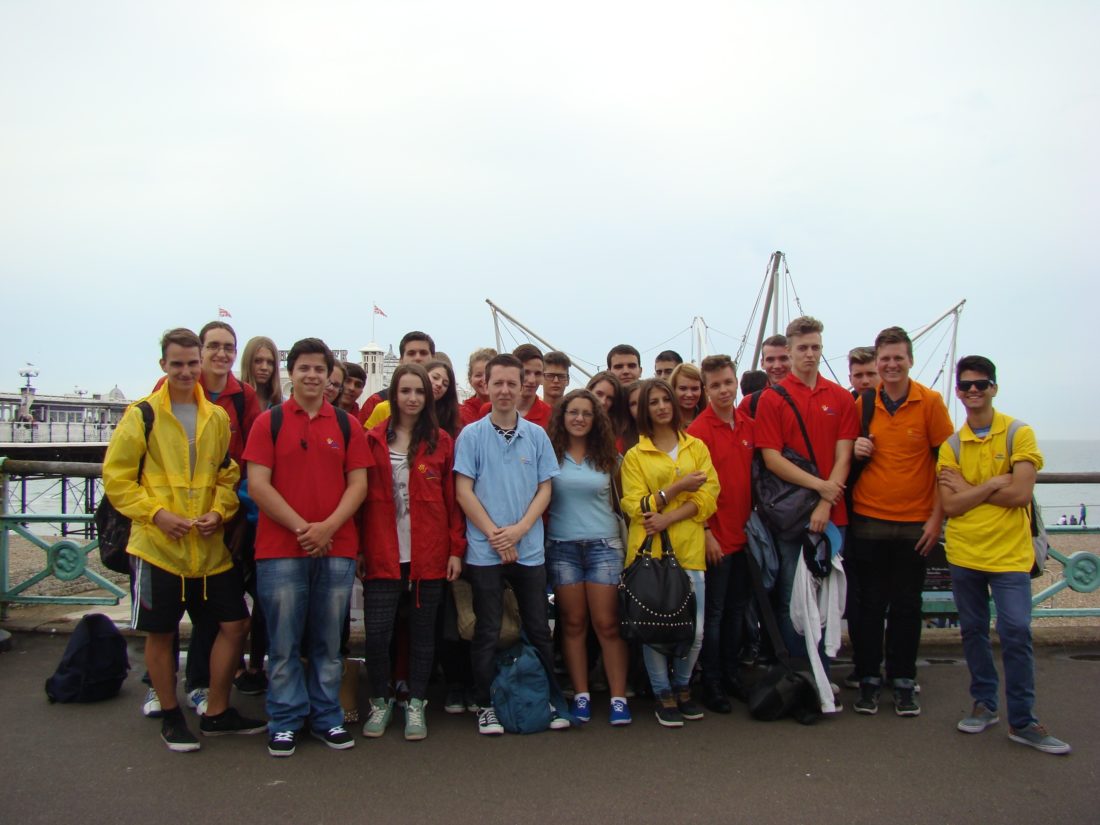 The best performing children on the Foundation’s language exam have arrived safe and sound to the city of Portsmouth stretching on the south coast of England, UK. The children from Jászberény, Kaposvár, Nagybajom, Pécs and Szeged met at Liszt Ferenc Int’l Airport at 6 a.m. to start their long journey. In Portsmouth, the host families waited us with big smiles and took us to our new homes.

After dinner the group is going to meet in front of the school to explore the area just a bit because tomorrow the working day starts for us in the language school, too.

At 8:45 the school programmes of the language camp started for all the Csányi students. We assembled in front of the school then Laura, who is our guide here, showed us the classroom where we wrote then placement tests. It was followed by a brief orientation meeting and now everyone knows where we have to be and when. The 30 students were divided into four smaller groups. In the morning lessons we mostly learned about our new classmates and teachers. Just after noon we had lunch in the school’s café. The afternoon lessons were out in town lessons showing the most important places of the town within a nice English lesson. At 4 p.m. tired and exhausted we got back to the school where we discussed the programmes with the mentors for the rest of the day. Today, all of us were more secure to use the language with teachers, host families and even with strangers.

Today the hard work started. Everyone was sent to a different group based on the test results written on Monday. In my group, we learned many new and useful things, which we can make use of if we are in England, e.g.: the colloquial names of coins and London slangs spread all over the country. After lunch, we went into town to see the sights with our teachers. We saw roofless church, which was bombed by the German troops and the beautiful coastline. After the lessons at 4 o’clock we got together at the Quays and went up the Spinnaker Tower. The view was breath-taking over the sea and Portsmouth. After dinner we went to the school again and took part in an ice-breaker talent show with the Italian students. This day was also very good and eventful and last but least, we learned many new things in English.

Day four of our stay in Portsmouth begun with some English language lessons, just like a weekday would do. After lunch we set off for Portsmouth City Museum, where we saw, among others, paintings of places in Portsmouth, tools, weapons and clothes from past centuries and some memorabilia of Portsmouth F.C., the local football club. But what I liked the most there was the living room of a British middle-class family from the 1950s, complete with original furniture and a television set of the age showing an evening programme from that time. After that, we boarded a ship and cruised around Portsmouth Harbour, seeing lots of warships stationed there.

The students also had lessons on Thursday morning, before going on to their last afternoon lessons which mainly featured talking and playing. Later, a barbecue party and some football drew people from different countries together.

Friday saw the last English lessons for us. Then, at noon, we were presented with our diplomas and some words about how hard we had worked throughout the week. The afternoon free time was spent in many different ways: some headed to have a closer look at those warships, while others spent their last pounds on Commercial Road. And there also were some who got prepared for tomorrow`s trip to Brighton, and, of course for our journey home.

The last day of the camp was spent in England’s most famous bath town, in Brighton. The town was familiar for most of us as we spent some weeks here before in another language camps. We started the day on the beach then we visited the well-known Brighton Pier and later we got into the business of the town centre. the day passed quickly and we had to say good-bye to the host families who helped us to get familiar with every little thing here in Portsmouth. tonight we said good-bye to the beach and we thank the Foundation for this possibility to be here and learn about this great city.