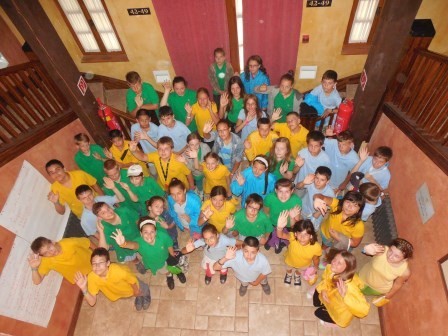 …for groups 3 of Nagybajom, Pécs and Szeged. The three groups started their day with travelling to Sarlóspuszta, the venue of the camp. By lunchtime everyone arrived and it was a happy moment to meet again with the members of the other groups. After lunch, everyone occupied their hotel rooms and the first day’s programme started. Visit to a nearby farm on horse drawn carriages, eating lángos and the ‘Betyár Show’. When we got back to the hotel, it was nice to jump into the pool and cool down a bit before dinner. After dinner the children got go play football or do arts and crafts, where they could do pottery and weaving.
Nb3, P3, SZ3

We started the second day of our camp with the morning P.E., which was held by the girls from Pécs. After the abundant breakfast we spent the rest of the day with the trainers of the O.K. Centre, Orsi and Laci. In the morning we played a lot, word maze, balloon leading in pairs, marsh marching, pastry castle building and balance exercises. During the afternoon, Mr Miklós visited us, who spent the rest of the day with us. After lunch, we dig deeper into the world of financial studies. We watched an introductory film and ppt about how to save money and how to spend it wisely. For snack we got nice apple pie and yoghurt. After the training just before dinner, one half of the group played a quick friendly football match, the other half went to do arts and crafts, played logic games or board games. After lunch, finally we could play number war. Our late night programme was watching the World Cup, which is 4-0 at the moment!

The morning P.E. lesson was not postponed in spite of the unfriendly weather. With the leadership of Orsi and Laci from the O.K. Centre we continued the financial studies. In the morning we had to solve tricky tasks and after lunch situational games were played. After the two days, at the final verdict moment, we had to realise that all of us are winners since the knowledge we gained during the two days will be our strength in the future. Before lunch we played the usual friendly football match, played badminton and volleyball and before sun set the three houses played number war against each other. And just before bedtime we could cheer for our favourite football team during the world cup.

We started the day with the P.E. lesson of the girls from Nagybajom. Then, after the abundant breakfast we were ready for the sporty day today. The children were divided into much smaller groups so everyone could try shooting, archery and could climb up in the adventure park. At the shooting station, Mr József told us the tricks of shooting and how to feed the riffles. The best shooters could take home the targets with the holes in them. The archers had a quick lesson before they could fire their arrows. As the day went by, everyone got closer and closer to bull’s eye. In the adventure park, the climbers could show their abilities to Mr Miklós how much they have improved since last year’s freshman’s camp. Before dinner we took the chance to jump into the pool to cool down a bit.

This day was also very good and full with good memories.

Today morning Ákos from Pécs was our P.E. trainer. After breakfast we were divided into two groups for the morning programmes. While one group was painting T-shirt, the other group was doing relay, activity and invasion games, half time the two groups swapped places of course. Both teams were happy and enjoyed every minute of the programmes. After lunch we participated in Puszta Olympics, where the red circle group seemed to be the best. The nice and tasty snack was followed by a surprise film watching. For dinner we got delicious pizza and after that we revived the best moments of the week. During the evening we celebrated each other because this was the time to introduce the winner teams of the championships of the week, which was followed by the consumption of the prizes.