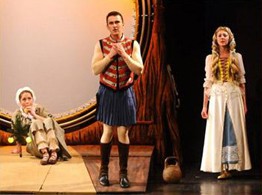 The groups of Jászberény watched a theatre performance called Csongor és Tünde which was written by Vörösmarty Mihály.

The theme of the play was everlasting love, which was depicted wonderfully on stage. The actors and actresses enthralled our students. The performances were particularly interesting and enjoyable because of the old fashioned language that was used. The costumes, stage and atmosphere of the play made this event unforgettable and encouraged us to organise other similar trips.