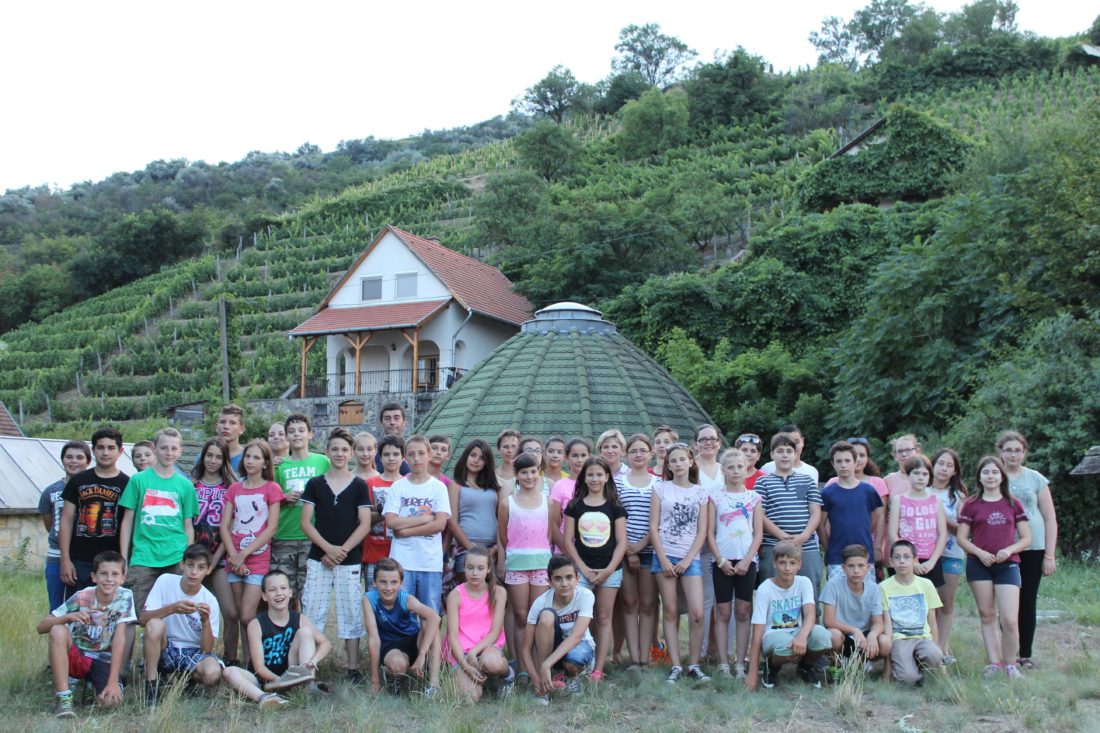 We had been waiting for the weekend with excitement, as on Sunday we were going to leave for Tokajhegyalja at the other end of the country.

We had been waiting for the weekend with excitement, as on Sunday we were going to leave for Tokajhegyalja at the other end of the country. We had already heard of this famous place, so we were happy to have our camp there this year. Students in Kaposvár got up the earliest, as they were already on their way towards Bóly at 6am. The next stop was Mohács and from there we proceeded our trip with the full number of students to conquer the hill. The journey was very tiring but our fatigue was blown away by the view of Mount Tokaj and the River Bodrog flowing into the River Tisza. On arrival we settled down at our accommodation then we went to have dinner. After that Miss Erika gave a briefing about the ground rules of the camp, expectations and the detailed programme. Later on in the evening we are going to root for the Hungarian eleven in the Hungary vs Belgium match. Go strong, Hungaryyyy!!!

Last night we returned sad to our accommodation because the match did not end to our liking… Even the gods lamented that our national eleven fell out of the championship, as we woke up to pouring rain this morning. During the morning hours we started the foreign language classes to prepare for the exam. Simultaneously the members of arTTér began their media training. The children could try their skill in this field, they learned about the knowhow of film making. After lunch we visited the local museum where we were divided into two groups and we could look at the permanent exhibition of the museum as well as an exhibition about the historical wine growing region of Tokaj and some other European countries. On the second floor we could try a hands-on, child-friendly, interactive exhibition: we could ride a bike along the wine route of this area, we could travel on a hot air balloon over Tokaj and we could speed down the streets of the town in a tiny red Fiat 500. After dinner we closed the day with a cheerful talent contest.

The morning exercise led by little mentor Matyi Darázs was refreshing for the children. After breakfast we went on a boat trip from Tokaj to Szabolcs. First we visited the museum then we had the opportunity to walk on and among the walls of the dirt castle.
After lunch we took a brief rest, then some students started their German exam. At the same time the others went canoeing up the River Bodrog to explore wild life and vegetation in that area. After dinner the children learnt the tragic news that their beloved drama teacher, Mr Attila had passed away. They all mourned together.

The day started with morning exercise again. During the morning hours, those who had not taken their German exam yesterday, did so. The others had some free time, during which they played and talked a lot. After lunch half of the group went to the sports field of the local school to play football, while the other half went for a walk in town. After returning to the camp, we started the English exam and the German learners who had been taking their language exam yesterday, while the first half had been on the river, went canoeing. We closed our day with a tour around town on the little train.

After the morning exercise we started our day fresh. After a short trip we arrived in Sárospatak. We took part in a guided tour around the castle and the Rákóczi Museum. In Széphalom we visited the Museum of the Hungarian Language, where the children could learn about the diversity of their mother tongue in an interactive way. At the closing of the day  they had a chance to try the longest bob tracks of Hungary in the Zemplén Adventure Park. We came back to the accommodation tired but with good memories.

On 1 July, 2016, the programme for groups Mohács 1 and 2 and Kaposvár 1 was a visit to the zoo in Nyíregyháza. In the zoo the wildlife of 5 continents is on display in an area of 30 hectares. The children formed groups and got maps, that is how they explored the inhabitants of the enormous park. Then, with Mr Miklós’s recommendation, they had a chance to have some of the best ice cream of Tokaj. At the closing of the day, they returned to the accommodation, packed their suitcases and bags to prepare for the journey back home the following day. Finally everybody went to bed.