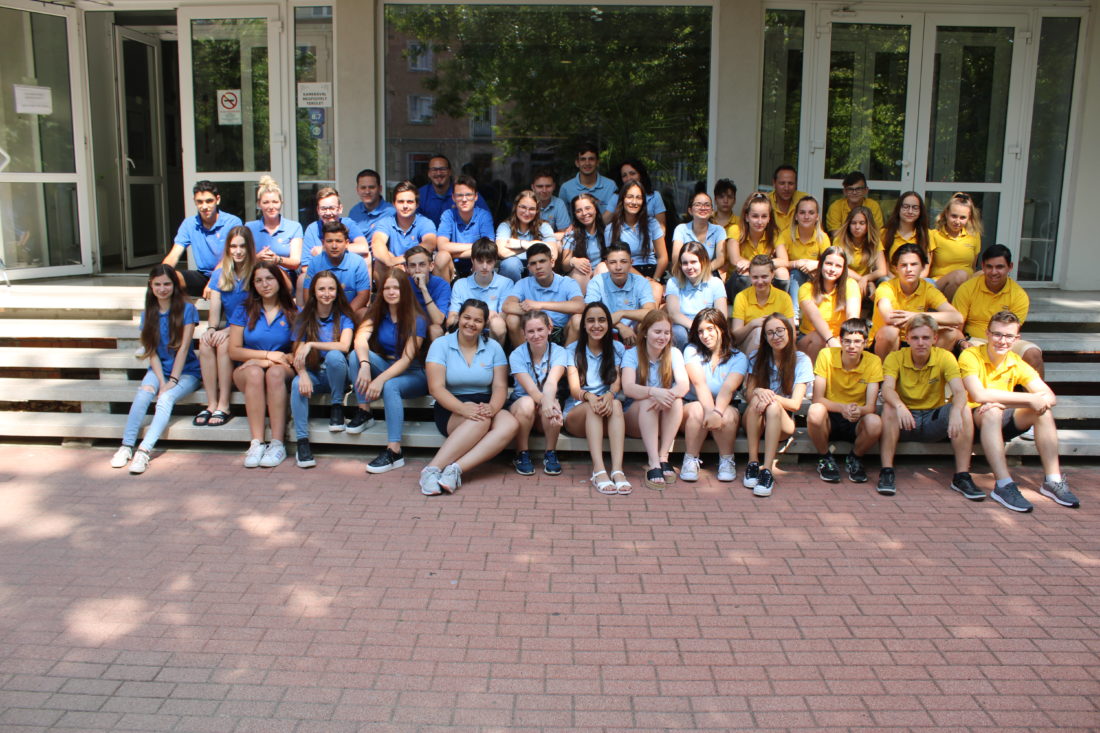 Following some initial introductions and icebreakers, we headed off for a small tour of the city so that the children could familiarise themselves with the surroundings. We were lucky to catch a stunning sunset, overlooking the „Queen’s city” (as Veszprém is commonly referred to) which coated the captivating castle and the nearby panorama in a fiery glow. Some of the children were brave enough to climb right out to the edge of the castle’s lookout – with the permission and constant observation of the Mentors, of course! The next morning marked the beginning of our group lessons. The children were split into three groups, and took part in a variety of different activites – all involving logic and problem solving in one way or another. While Ádám guided the children along the world of logic, Mr. András incorporated a few thought-provoking drama activities into his lessons. The younger Mentors also provided a huge helping hand, by playing a few (logic based) games with the children to help them recharge their brains after lessons. A thunderstorm – which unfortunately followed after lunch – left us confined within the walls of the nearby shopping mall. However, we managed to take advantage of the opportunity and went to watch a movie instead. Holding a can of Coca Cola in one hand and a box of steaming hot popcorn in the other, the children walked into the Cinema to watch the movie of their choice: either Space Jam or Black Widow. Much to our relief, by the time the movies ended the weather had cleared up, and therefore the much anticipated evening football match could be held. The post-rain atmosphere proved to be the perfect weather to get some exercise in and loosen up our muscles. The day ended with the children playing a number of different board and card games – an evening activity which became a favourite throughout the week, as it sustained its popularity from one night to the next. The morning lessons proved to be interesting and engaging as the days went by, with the children picking up several debating and thinking skills. Some of them even spent hours trying to persuade each other on what was – in their opinion – the correct answer to the problem Mr. András had asked. Of course, these questions – which required a great deal of logical thinking – did not have a definite answer, and so the real reward was not obtaining the correct answer, but instead developing crucial thinking skills. The afternoon programs often varied though, with the second day consisting of a trip to Tihany. The scenery was truly charming, with Tihany’s expansive fields of lavender that scintillated under the afternoon sun becoming a very popular photo spot for the children indeed. We went for a tour of the iconic Abbey, discovering it’s rich history and culture through a short film and (our Mentor) Mr. András’s quick history lesson. The Pécs 2. group even recalled a poem, which perfectly illustrated the captivating view of the Lake Balaton that we had the chance to enjoy.

Our programme after lunch was more exotic, we’ve visited the ZOO in Veszprém. From little rodents to monkeys to big wild cats we could see and learn everything about them. Beside the colorful habitance we’ve watched the so called Dinosaur Park. Apart from the Mentors, there are also volunteers who assist in the work to be done at camp. Following our trip to the zoo, we gathered in the main hall to listen to a presentation by Marosi Kamilla, a volunteer from Singapore. She presented in three languages (English, Chinese and Hungarian) which the children found highly intriguing – learning a few Chinese characters and basic sentences was a huge success. They were able to learn a lot about Asian heritage and culture. We said goodbye to our camp, with our exciting weekly projects and programs. Strategy and logic came to the fore again. We organized many quizzes, starting with a demanding discussion, a creative and active construction competition and ending the week with an evening quiz show. MCC staff member Alexandra Szemere, a workshop leader, also visited us, with whom we were able to practice the technique of discussion and reasoning. “Werewolf” and “Bang!” through the games, we had the opportunity to develop our strategy and situational awareness, complementing the practices of discussion culture and logical thinking. There was also time to relax, as we spent an entire afternoon on the beach of Balatonalmádi. Of course, such a camp would not have been possible without the tireless efforts of the Mentors. Mrs. Annamária, Mrs. Szilvi and Mr. András have been the heart and soul of this community. We have always been able to turn to them, regardless of the issue we had stumbled upon. For this, we thank them for the long hours of hard work and planning they put in, to ensure we had a great time! (Marosi Kamilla)