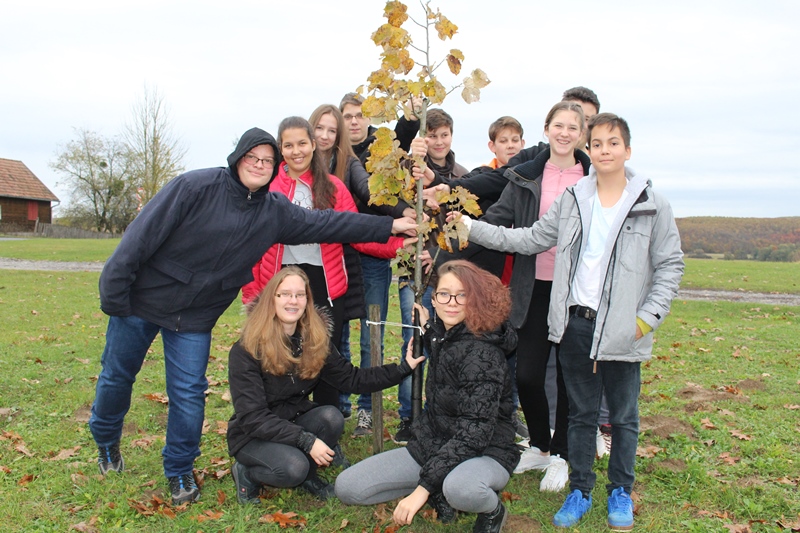 Apart from the summer camps, one thing we always look forward to each year is our autumn group trip. As our trip two years ago was very successful, we decided to relive our old memories from Bánya, so it wasn’t a question that we would go again to this small village located in the heart of the Zselic forest as part of our project titled ‘Our Home…’. We were foresighted, so we brought umbrellas, along with (as our mentor asked) good mood and happiness. All of them put together, we spent two very good days there.

Parents also helped us get there. One of our groupmates could, unfortunately, only spend very little time with us. Lilla Fekete went to her first big competition in snowboarding. We wished her good luck in the form of a drama game. Weather wasn’t very kind to us, but we made the best out of it. As soon as rain stopped, we set out on a walk from the guest house high atop a hill, to the valley into the village of Bánya. We looked carefully at the houses we found interesting for some reason. By the time we explored the village, it had started raining again. We went back into he warmth of the guest house to present our ‘findings’ on two topics: the boys collected pictures of a famous house in a given country (that being a parliament), while us, girls presented about teahouses and dressed up as geishas for fun.

We became very hungry by the time we finished the presentations, so we made pancakes together. Or, at least, we tried. It quickly emerged that some boys are better at making pancakes than the girls, and a few pancakes landed outside the pan. In the evening we organised a little dance house where we also had a good share of laughter and everyone followed our instructions properly. Before going to bed we had another short walk in the hopes of seeing start this far from the town, but we were unlucky: although it was not raining, the sky wasn’t clear. We finished the day with a board game, which lasted a little longer than we thought, so we couldn’t watch a film together as we had planned, but we didn’t really mind it.

The second day revolved around the word ‘community’. After breakfast we made a time capsule, in which we put our thoughts and feelings about our community on little slips of paper. We dug the time capsule into the ground next to a tree we had just planted, as we planted another tree the last time we were here, so there are now two young trees. We feel so good here, if we keep coming back, soon we’ll plant a whole forest! The little yew is going to grow very tall and it will love its place in the heart of Somogy as much as we love this area.

Late in the morning on Sunday we had some guests. First was Máté Varga, the leader of our history talent workshop, who led a discussion about how community spaces evolved in history and what kind of communities people belonged to, from prehistory until today. We learnt a lot of new and interesting things, like the identity of the first community space in human history. Yes, it was the fire, people would gather around the fire.

Péter Trixler Szabó (a groupmate of ours who currently studies Architecture) also held a presentation. We were amazed. We saw images of staggering buildings and we talked about how we could make, say, a room full of computers nicer, livelier with some green plants. We were impressed by what modern architecture is capable of building: like we were watching an imaginary house in a film, but it was ’just’ an opera house in Azerbaijan. If there’s a trip to Bánya, there’s also potato paprikash, which was again made by our mentor. After lunch we tidied up together, then made a final walk in the beautiful nature. I’m sure this walk is one to remember for everyone, as no sooner than we had descended from the hill, we encountered a huge flock of sheep. They were everywhere, on the whole hill. The sight was beautiful and it was a little bit extraordinary for us, who grew up in the town. We felt like we were in another country, where it’s natural to see a shepherd, a flock, a dog and a donkey. Like if we had travelled back in time or into a fairy tale!

We got more lasting experience in our trip to Bánya and it’s slowly becoming our favourite, but something always happens to make it better every time!