“On Friday, 30.05.2022, the graduation concert of my Pécs 3 groupmate, Tihamér Szereceán Szihamér took place in the Budapest Jazz Club. The event was free of charge, so there was no limit to the number of audience members and the concert hall was filled with people standing next to the occupied seats. The performance itself was an experience of a lifetime: each member of the orchestra chose a song, which was carefully learned and practised and presented to us. The harmony, cooperation and preparation of the musicians in the chosen songs was palpable. Tihamér’s choice was also partly influenced by a previous event, as he had performed with one of the founding members of the band Snarky Puppy, Grammy Award-winning Bill Laurance, with his band. His song was Red Sand, which Bill had scored. I feel that this song was the one that best showcased everyone’s musicality, but most importantly, it was evident that both the performers and the audience enjoyed the performance. We wish Tihamér continued success and hearty congratulations on his quality performance, which officially makes him a Jazz Bassist.” 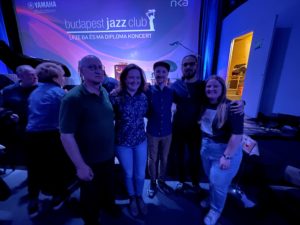