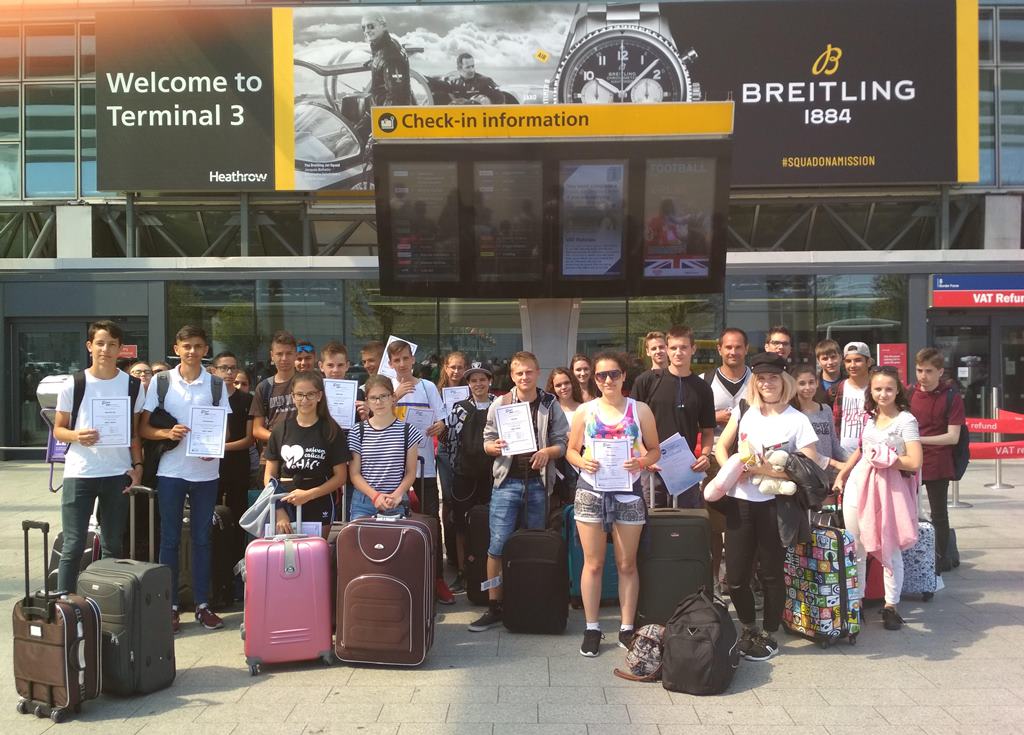 Today we got up rather early again as we all had to meet in front of the school at 8:30. So we all said goodbye to our host families who took care of us this past week and got on the bus for London. We arrived at the airport very early so we had quite some time to spend all the change we had. Our flight was just as exciting as the first time. We could take a last look at Eastbourne from above, which we are certainly going to miss a lot. We really enjoyed this past week and most of us honestly hope to come back again next year. We are truly grateful to our sponsors and to the Foundation for this exceptional opportunity. 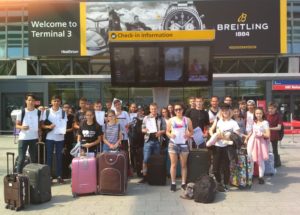 On our last day in England we visited London to see some of the most famous sights. We got up early and met at the train station. In London, we arrived at Victoria train station, then we  walked straight to Buckingham Palace. We took some photos in front of Elizabeth II’s home and we continued our way to Westminster Abbey where the royal family members are baptized, and buried. The Parliament was a few steps away from here, but unfortunately its most well-known part, the Big Ben has been under renovation. Next we visited the London Eye, but we were looking forward to the London Dungeon the most. This is a very interactive museum where we can experience London’s most significant historic events. We got the plague, experienced the great fire of London, and we also came across Jack the Ripper. Of course, we could not miss the London tube, so we went to our next station, Oxford Street, by underground. Unfortunately, we did not have much time because we had to get back to the train station in time. We were very tired at the end of the day, but had a great time in London. 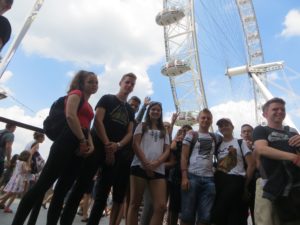 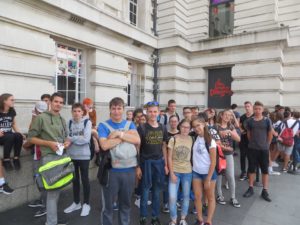 Today was our last day at school and we were rather disappointed as we had to say or final goodbyes to our groupmates and teachers. At lunchtime we had the opportunity to try the traditional British fish and chips, which proved to be quite delicious. In the afternoon we hopped on the Eastbourne sightseeing bus and didn’t hop off till Beachy Head. From there we had a long walk to the next stop while enjoying the spectacular view from the top of the giant white cliffs. We ended up at the city centre where we had some free time to buy some refreshment after the exhausting trip. In the evening we were taken to the cinema where most of us watched Skyscraper, while a couple of us chose Jurassic World. We got home quite late at night and went straight to bed because a busy yet exciting day awaits us tomorrow. 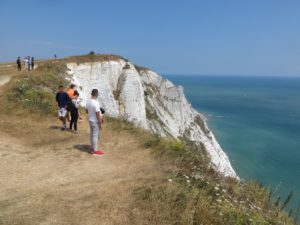 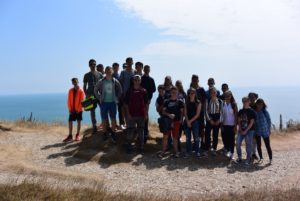 During the morning lessons we further enhanced our cultural competence as we collected all kinds of information about the different countries and nationalities. Since this was a pairwork activity we had to interact a lot with our foreign partners so it was an excellent and fun way to practice English and improve our oral skills. After the delicious lunch we headed to the beach where the more adventurous ones could try kayaking. Though the water was rather cold, it was an amazing experience. Meanwhile the rest of the group walked into the city centre to buy some souvenirs. After having dinner with the host families some of us met on the beach to enjoy the nice breeze and the sunset. 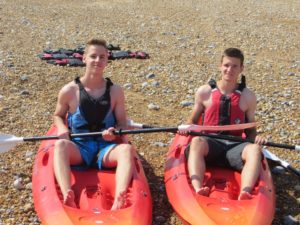 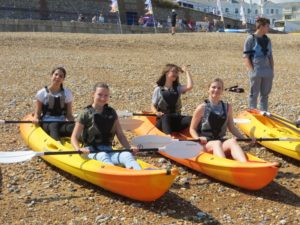 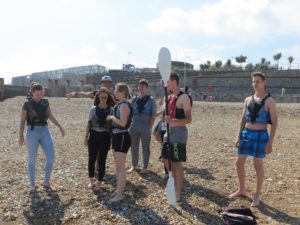 After our usual morning routine we all arrived at school, where we had the chance to get acquainted with the cuisine of the different nationalities. We were also asked to introduce our national dishes to our groupmates and created our favourite recipes in theory. In the afternoon we separated into two groups. Some of us climbed up to Beachy Head to enjoy the spectacular view of the highest limestone walls of Great Britain. Meanwhile the others wandered along the beach and explored the city centre. We all met back at school where we could finally have some rest while having a BBQ. In the evening we did all kinds of sport activities and also watched the semi-final of World Cup together. 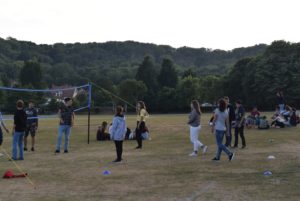 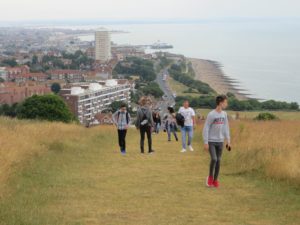 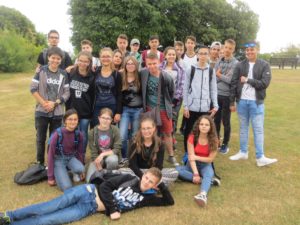 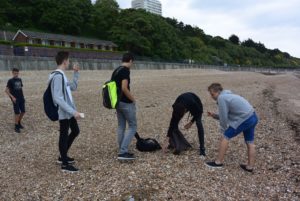 Today also began with the language lessons, only this time all of us were divided into separate groups according to our age and level. The objective of today’s lessons was to get to know each other better through several playful and fun activities. In the afternoon we went on an excursion to Brighton by train. First we walked down to the beach and had some free time on the Pier. While some of us looked around, others ventured into the cold water. On our way back to the station we visited the spectacular oriental palace of the Royal Pavilion. As we arrived in Eastbourne we had a quick dinner with our host families, then the buses took us back to school to have fun at the school disco. Those who weren’t interested could cheer for their favourite football team in front of a widescreen. 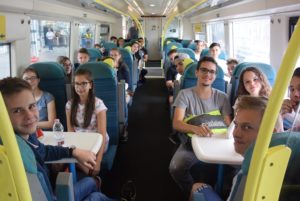 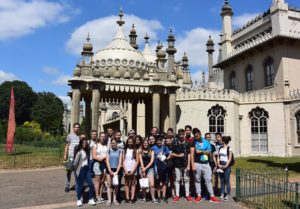 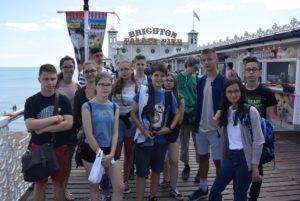 After yesterday’s long journey, we have thrown ourselves into language learning. With some minor delays, we all successfully arrived at schools where we first participated in a written and oral test to get into the right groups based on our language skills. After the test, there was a general briefing and then we continued studying. In the afternoon, we got familiar with Eastbourne and had some free time to explore downtown. We spent the rest of the afternoon and evening at the host families. 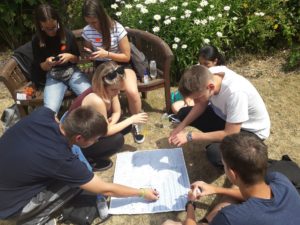 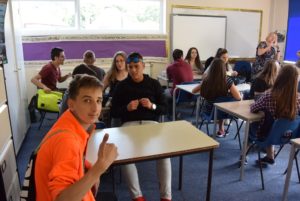 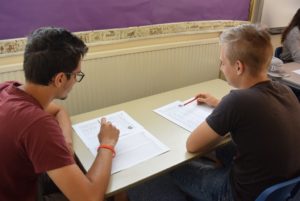 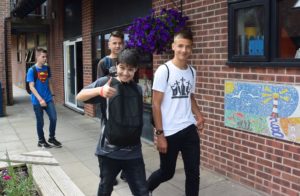 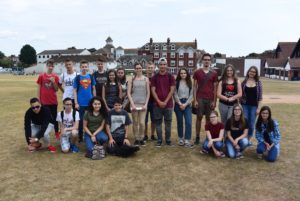 The participants of the Eastbourne English Language Camp arrived safe and sound in London late afternoon, where one of the volunteers from the school had already been waiting for us. After a late-night bus ride, our first day ended with a fast dinner at the host families.