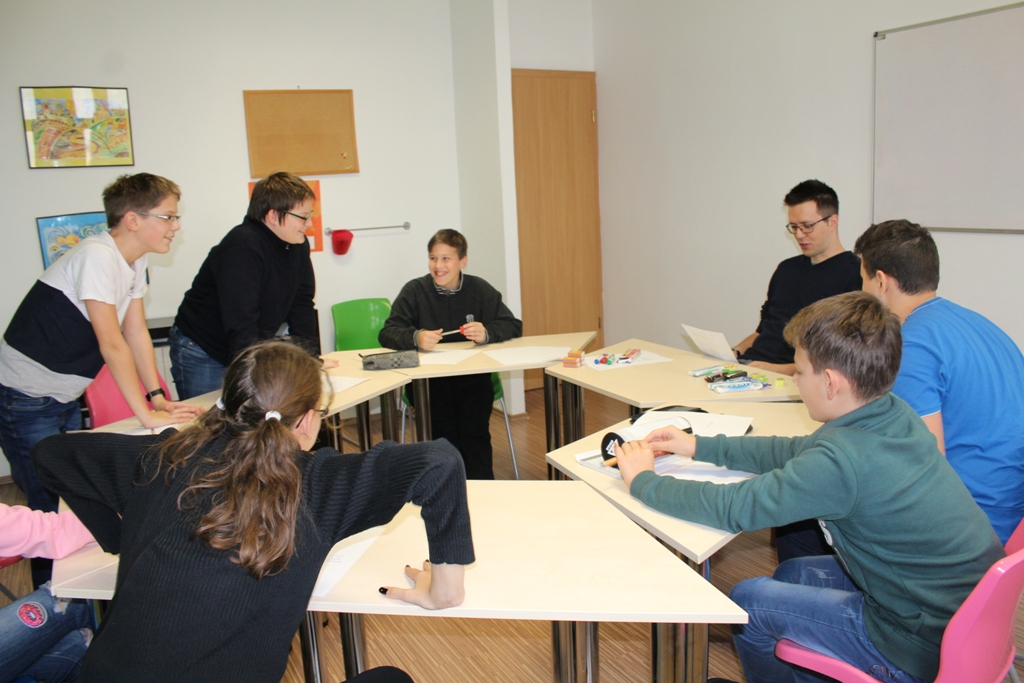 Kaposvár: Today Group 1 and Group 2 of Kaposvár participated in a playful logic class held by Ádám Balogh, who challenged us with a range of entertaining and motivating activities.

„I like coming to the Foundation because we always learn differently, more interestingly here. Just like today in the logic lesson, where we could test ourselves by solving some really exciting and thought-provoking puzzles. The atmosphere, as well as the exercises and the company were all great, not to mention Ádám who is super cool.” (Péter Ihász Kaposvár 2)

„Today we had an hour long logic class, which I particularly enjoyed. The teacher, Ádám was very kind and witty. Before the lesson I was convinced that this would be an especially boring afternoon but, on the contrary, I had an amazing time and at the end I was really disappointed that it was over.” (Zsófia Kada Kaposvár 1)

„The class started with a simple game, which was followed by more difficult and challenging puzzles. The atmosphere was friendly and pleasant and instead of a boring lesson we got an amazingly entertaining one, where we could have a lot of fun. The class ended with the announcement of our results and we were even given some chocolate.” (Ivett Begovácz Kaposvár 1)

„This afternoon was full of exciting and interesting games, which were brought to us by Ádám from Budapest. The challenging exercises were accompanied by some chocolate we could win at the end. In one of the puzzles we had to figure out the missing parts of a story. I liked this one the best. All in all, I had a wonderful time with Ádám and I do hope that he will be back soon.” (Péter Sárközi Kaposvár 2)

From my point of view

“I was waiting excitedly for my first meeting with Csanyi Alapitvany – starting with a full long weekend plan: playful, logical lessons beginning in Kaposvar through Pecs and then finishing in Mohacs.

We started with the eighth graders in Kaposvar then went down a year, continuing with seventh graders. The first occasion is always an extra challenge as the primary thought after the word ‘logic’ is usually ‘maths’ which is only a step away from ‘boring’, ‘difficult’ and ‘I don’t know this anyway’. Therefore I tried to bring the widest selection of tasks possible so everyone could find some that was close to him or her: we had standard IQ test question, word game, making triangles from matches, logical crime story, counting squares on a picture and even a closing ‘Bumm!’ game with one of the groups. Both groups performed above my expectations in all dimensions: luckily, I didn’t have to spend any time silencing kids (huge thanks to Sasa and Lilla for teaching them how to behave – and for doing everything on Saturday to make me feel at home at once). Instead, everyone was concentrating hard and was trying to solve the problems as fast as possible (as that meant more points – which meant a better place when choosing from the chocolates at the end of the lesson). After 58 minutes, when I asked if they wanted another last question, nobody whined for the well-deserved snacks – and even during eating, we spent the time solving crime stories together.

I hope that after this good start there will be a second sometime soon – giving the opportunity to this weekend’s runner-ups for revenge on the winners Levente and Peti!” Ádám Balogh, tutor

Pécs: Logic games On October 30th children from groups Pécs 1 and 2 took part in a logical games day with the help of Adam. It was a great day for all.

“On Monday 30th October, Adam from Budapest came to Pécs and held a very exciting workshop for us on logic. It was very interesting to see how he is thinking. We had many tasks and solved many puzzles. It was a great day.” Polgár Antónia Pécs 1.

“Today I could take part in a logic workshop with many interesting tasks and puzzles.” Barkóczy Zsombor, Pécs 2.

“There were many exciting tasks and puzzles among them, I really liked it when I had to finish a story. “Flibert Virág, Pécs 2.